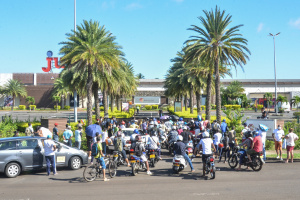 People wait to enter to a supermarket as only persons with the last name that starts from A to G are allowed to enter at the Riche Terre Mall in Port Louis, Mauritius, on April 2, 2020. Residents of the Indian Ocean island nation Mauritius rushed to supermarkets on April 2, 2020, after they had been shut for 10 days under a lockdown to curb the spread of the COVID-19 coronavirus. (Doreck Clair / L'Express Maurice / AFP)

(AFP) - Mauritius on Wednesday went into a two-week nationwide lockdown, the second time the Indian Ocean archipelago nation has imposed such a restriction since the coronavirus pandemic began a year ago.

"We had no other choice but total containment in order to prevent the spread of the virus and protect the population," Prime Minister Pravind Kumar Jugnauth announced Tuesday evening in a televised address.

Only essential services will be operational from Wednesday, including the port, airport, hospital services and emergency relief.

As of Thursday, supermarkets, bakeries, petrol stations and pharmacies will be accessible on an alphabetical rotation basis.

"I am sure we will be able to resume our activities as soon as possible," Jugnauth said.

The latest lockdown follows one imposed in March 2020 in the island nation of 1.3 million.

"Mauritius had no choice but to impose this containment in order to break the chain of transmission of the virus," he said.

As of March 7, Mauritius had registered a total of 641 cases since the beginning of the pandemic, including 10 deaths and 40 active cases.