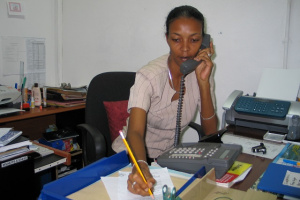 (Seychelles News Agency) - The Seychelles' Office of the Ombudsman registered 166 complaints in 2020, mostly related to malpractice within the public sector, a top official said on Friday.

The Ombudsman, Nichole Tirant-Ghérardi, presented her office's annual report to President Wavel Ramkalawan, and told the island nation's leader that more work needs to be done inside government.

"I have experienced some frustrations within the public sector. Certain ministries have not adopted recommendations put forth, instead most of the time they said they needed to seek legal advice first before taking a decision," Tirant-Ghérardi told journalists.

"Under the Ombudsman's standard operating practice, where the complaint is premature, we advise the complainant of the options available to them and prepare, where necessary, referral letters to ease access to those services," she added.

As of the date of the report, the Ombudsman Office has retained 27 complaints for investigation and three for mediation.

The report set out the thematic activities of the Ombudsman office as well as some of the issues that were subjected to scrutiny by a team of investigators in 2020.

Tirant-Ghérardi said that she has noted a general weakness across many public authorities in respect of important official documents, such as job descriptions, position papers, reports, and sometimes even official and statutory forms.

"A document that is incomplete, lacks the date, signature or other identifications cannot serve its full purpose to fix the time and identify its provenance, said Tirant-Ghérardi.

As a recommendation, the Office of the Ombudsman said that all public authorities should review their official documentation and statutory forms. This will ensure that this anomaly is fully addressed and that all official forms carry the correct formulation in accordance with the relevant regulations.

In the 2019 annual report, the Office of the Ombudsman recommended that all public authorities set up effective internal complaint handling mechanisms to deal with complaints and grievances and improve their service delivery.

"This time again, it has been included in the report as it was not implemented the correct way. The government did set up a sort of complaint bureau, but it was not the idea that we wanted," said Tirant-Ghérardi.

"We wanted people to seek recourse for their grievances within the organisations they are working for first before going elsewhere," she added.

In terms of the mandate of the Ombudsman, Tirant-Ghérardi said that she has made a proposal to the president to see how this role can be strengthened.

The Ombudsman office was first created in 1993 with a role to investigate actions and malpractices, including fraud and corruption and human rights violation, by public entities and officers and scrutinise laws passed by the legislature and executive to ensure that they are in line with the Constitution.

The general Annual Report of the Office of the Ombudsman is submitted each year to the National Assembly and copied to the President in compliance with the Constitution.

This year, the report will only be published in an electronic format as part of the cost-cutting efforts of the Ombudsman in the COVID-19 pandemic.