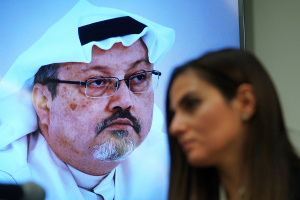 (FILES) In this file photo Sherine Tadros, head of New York (UN) Office of Amnesty International, speaks during a news conference at the United Nations on October 18, 2018 next to a photo of Jamal Khashoggi. A US intelligence report on the murder of journalist Jamal Khashoggi in the Saudi consulate in Istanbul will be out "soon," the White House said on February 24, 2021. Press Secretary Jen Psaki said that President Joe Biden was also "soon" due to speak with Saudi Arabia's King Salman. (TIMOTHY A. CLARY / AFP)

Biden kept the king waiting in his long list of calls to US allies after being sworn in five weeks ago.

And when he did finally reach out to the Saudis, it was pointedly to the king and not the expected successor Crown Prince Mohammed bin Salman, commonly known as MBS.

The telephone diplomacy was all part of what the White House is calling a reset in relations in the wake of Khashoggi's horrific 2018 murder inside the Saudi consulate in Istanbul, Turkey.

A US intelligence report on the incident, in which Khashoggi is believed to have been killed and then chopped into pieces, is being made public "soon," the White House says.

It is expected to state that the crown prince in some capacity was connected to the killing, which involved a whole squad of Saudi agents positioned at the consulate before Khashoggi visited.

Khashoggi, a Saudi national who wrote for The Washington Post and was a US resident, had been an outspoken critic of the young prince.

The White House said that Biden and the 85-year-old king emphasized the countries' security ties and "the US commitment to help Saudi Arabia defend its territory as it faces attacks from Iranian-aligned groups."

However, in a shift from the Donald Trump era, Biden also "affirmed the importance the United States places on universal human rights and the rule of law."

The Saudi state news agency said in its readout that the king and Biden stressed "the depth of the relationship between the two countries" and discussed Iran's "destabilizing activities and its support for terrorist groups" in the region.

Biden is likely to have his hands tied to some extent, because the reality is that MBS is lined up to take over Saudi Arabia and is already the de facto ruler. Typically, the United States does not impose sanctions on top-level foreign leaders.

With its vast oil reserves and rivalry with Iran, Saudi Arabia is also a vital strategic ally. A reminder of shared US and Saudi interests in the region came Thursday when the US military struck at facilities they said were being used by Iran-backed forces in Syria.

But the intelligence report's publication, which could come as early as Friday, is a sharp departure in tone, reinforcing the administration's policy of calling out Saudi Arabia on rights issues.

US Secretary of State Antony Blinken on Thursday had his own telephone call with Saudi Foreign Minister Faisal bin Farhan.

They "discussed the importance of Saudi progress on human rights, including through legal and judicial reforms," State Department spokesman Ned Price said.

"President Biden should now fulfill his promise to hold MBS accountable for this murder by, at minimum, imposing the same sanctions on him as those imposed on his underlying culprits and ending the weapons transfers to Saudi Arabia that would be controlled by an unelected, brutal murderer," she said.

In Saudi Arabia, five people were handed death sentences over the murder. But a Saudi court in September overturned them while giving jail terms of up to 20 years to eight unnamed defendants following secretive legal proceedings.

Human rights advocates called the judicial process a whitewash aimed at blaming the hit men while not touching the mastermind.

CNN, quoting documents filed in a Canadian civil lawsuit, reported that two private jets used by the squad that allegedly flew to Istanbul to kill Khashoggi were owned by a company earlier seized by Prince Mohammed.

A respected veteran journalist and editor, Khashoggi was in self-exile and residing in the United States, writing articles critical of the crown prince when he was assassinated on October 2, 2018.

The 59-year-old writer had been told by Saudi Arabia's ambassador to the United States to go to the Saudi consulate in Istanbul if he wanted to obtain documents for his forthcoming marriage.

There he was killed, and his body dismembered by a team sent from Riyadh under the direction of Prince Mohammed's top security aide, Saud al-Qahtani.