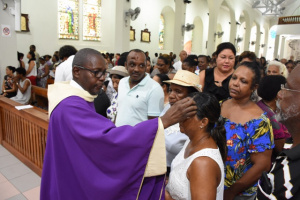 Ash Wednesday in February last year when Seychelles had not registered its first case of COVID-19. This year Ash As Wednesday was observed with people being confined at home. (Seychelles Nation)

(Seychelles News Agency) - Christians in Seychelles this year are observing Lent at a distance, with prayers, devotions and the weekly way of the cross being broadcast on television.

Lent, which started last week with Ash Wednesday, is observed over 40 days and ends with the celebration of Easter. The main Christian churches on the island nation, the Anglican and Catholic Churches, are asking devotees to use this time in confinement to be closer to their families and Christ, with the Church accompanying them.

The Vicar General of the Catholic Diocese of Port Victoria, Father Eric Leon, said history was made this year as the start of Lent, Ash Wednesday, was observed with people being confined at home.

"Interestingly, historically the church started this way. There was no parish. The pandemic has come to remind us of the basis of the church which is the family. The purpose of the church is to strengthen families and help people live their faith in their families," explained Leon.

Father Leon added that Lent is a time for sacrifice and to rethink our way of life which has resulted in the family being forgotten. "COVID-19 reminds us of what is important in life. If my family cannot welcome God, that is, we have a problem. This Lent will be special because families have time to work on themselves. Every day, the church will accompany them with recordings already made and which will be broadcast morning, noon and evening," said Leon.

In his pastoral letter for Lent, the Bishop of the Anglican Church in Seychelles – 115 islands in the western Indian Ocean, said that this is the time when "we enter this blessed season of deeper dialogue with God through prayer and daily reading of the Word of God; of appreciation for his mercy especially for people whose lives are under attack."

James Wong said every year he writes a letter to assist the faithful members to have a blessed and fruitful season. "The central message of the Church has been, is and will always be reconciliation. Reconciliation among humans and between humankind and God," added Wong.

Lent is six weeks from Ash Wednesday to Easter. It is a period where Christians replicate Jesus Christ's sacrifice and withdrawal into the desert for 40 days. This is normally done through the 'giving up' of or abstaining from something important to a person's lifestyle.

On Ash Wednesday priests mark the foreheads of Christians with palm ashes. On Good Friday (April 2 this year) Christians remember Jesus' death. Two days later is Easter Sunday, one of the most important events in the Catholic liturgy, when Christians celebrate Jesus rising from the dead, an opportunity for eternal life.

During Lent there will be daily devotions on the national television, SBC, and on Fridays, the way of the cross is broadcast. Churches are also making use of social media to share prayers and devotions for both children and adults.

A Roman Catholic told SNA that she sees many benefits for devotees with the new normal. "Not all people had the time or could take the time to converge as a congregation in church, but now more people in the comfort of their own home can follow and participate in the service and prayers," said Lynn Betsy.

However, Betsy hopes that by Good Friday, the restrictions will have been lifted, as people would have taken their vaccinations and can participate in the traditional way of the cross which normally attracts thousands of devotees.