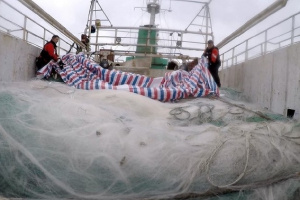 Large pelagic driftnets are those over 2.5-kilometre-long and many metres deep that are left drifting in the ocean. (Alec Haley/Flickr) Photo License: CC BY-NC-ND 2.0

The statement made by the Seychelles' fisheries' minister, Jean-Francois Ferrari, in a press conference on Wednesday comes after a press communique from Europêche, the representative body for fishermen in the European Union last week.

A resolution was adopted in 1991 by the United Nations General Assembly asking all members of the international community to implement a global moratorium on all large-scale pelagic driftnet fishing on the world's oceans and seas.

The executive secretary of the Seychelles-based IOTC secretariat, Christopher O'Brien, told SNA that "in 2012, the IOTC through Resolution 12/12, prohibited the use of large-scale driftnets on the high seas in the IOTC area of competence."

Europêche said that despite the bans, driftnet fishing is still used, "especially in the Indian Ocean, responsible nowadays for around 20 percent of the total catches of yellowfin tuna and high levels of by-catch of threatened and protected species such as sharks, marine mammals and turtles."

Driftnet fishing is a fishing technique where nets hang vertically in the water column without being anchored to the bottom. Large pelagic driftnets are those over 2.5-kilometre-long and many metres deep that are left drifting in the ocean to catch any living creature that happens to swim by.

According to the communique, the European fishing sector strongly believes it is high time for IOTC and other tuna-RFMOs to make driftnet fisheries accountable for their actions, rather than rewarding them after 30 years of trespassing red lights.

"The EU should also consider taking market measures against IOTC countries not compliant with international rules, otherwise, it may be too late for the yellowfin tuna stock to recover and for the protection of sensitive species, despite the efforts and cuts imposed on the European tuna fishing fleet," Europêche said.

The Seychelles' Minister for fisheries said that although Europêche is asking that actions need to be taken against countries not respecting the ban, the big question is who will take these actions.

"In the Indian Ocean, these nets are mostly used in the north. One country that I can say is a real culprit is Iran. Seychelles cannot put pressure on Iran, as we do not do commerce with Iran and hence do not have negotiations to hold with the country. We agree with Europêche when it asks the EU, which is much bigger and does commerce with Iran, to put pressure on Iran so that it can stop using driftnets that have been banned," said Ferrari.

"We expect the EU, a member of IOTC as a distant fishing nation and that has much more muscle than us to step up and to ensure that those gears that have been banned cease to be used and that we have a clean and sustainable fishery for many more years," he added.

The IOTC executive secretary said that the next IOTC meeting -- a special session to be held in March -- will focus on the stock status of yellowfin tuna and skipjack tuna.

He added that this year, IOTC members through Resolution 17/07 further strengthened the action to prohibit the use of large-scale driftnets in the entire IOTC area of competence which includes the Exclusive Economic Zones. This is due to be implemented by January 2022.

The president of Europêche, Javier Garat, said that "the EU and Maldives have formally tabled proposals to the meeting."

Europêche expressed that this meeting might represent a good opportunity for the commission to using the stick rather than the carrot.