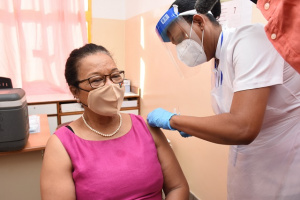 Covishield rolled out on January 26 and was first given to the country's leaders. (Seychelles Nation)

(Seychelles News Agency) - The Seychelles' health authority is increasing the interval between the first and second dose of the Covishield vaccine as per the recommendation of the World Health Organisation (WHO).

The Ministry of Health said on Monday that the second dose of the vaccine will be administered eight weeks after the first.

The Oxford AstraZeneca vaccine, also known as Covishield, was rolled out on January 26 for people above 60 years in Seychelles in the second phase of the COVID-19 vaccination campaign.

The health ministry said that "research by the manufacturers, Oxford University (United Kingdom) and AstraZeneca, conducted in various countries highlights that the vaccine is more efficient if the interval between the two doses is longer."

According to the WHO guidance published on February 10, an interval of 8 to 12 weeks between the first and second dose of the vaccine is recommended given the observation that the efficacy and production of antibodies to fight the virus increase with a longer delay between the doses.

"It is observed that prolonging the time between when someone receives the second dose for up to 12 weeks increases the level of antibodies produced following the first dose therefore greatly reinforcing vaccine efficacy after the second dose is administered," added the WHO guidelines.

To help ensure that Seychelles reaches its target and reopens the country to any visitors in mid-March, President Wavel Ramkalawan secured another 25,000 Covishield vaccines through a private donor during his visit to the UAE last weekend.

Meanwhile, the vaccination campaign continues in the island nation in the western Indian Ocean, with the administration of the second dose for individuals who have already received the first dose for the Sinopharm.

Administration of the first dose of the Covishield vaccine has been extended to people over 50 and over 40 years as different target groups who can receive the vaccine are covered.