$2,350 set as minimum for banks to seek more client info in Seychelles 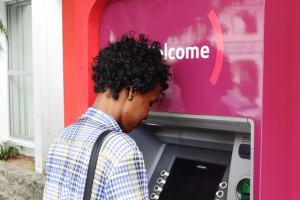 Moustache said the banks are encouraging people to use alternative forms of banking such as using the ATM cash machine to facilitate their procedures and avoid frustrations. (Seychelles Nation)

(Seychelles News Agency) - A sum of SCR50,000 ($2,350) has been set as the threshold for commercial banks in Seychelles to acquire information on purposes of transactions while dealing with their clients, said a top official of the Financial Intelligence Unit (FIU).

The director of FIU, Richard Rampal, told reporters that the threshold has been set because there were many concerns raised by members of the public that the level of information the banks requested when transacting was too much.

"From there, we have met with commercial banks to look at the issue. We gathered that each bank was having its own interpretation of the law and how to implement it, as it was not clear... Therefore we have relooked at the issue and decided that the threshold for reporting is SCR50,000," said Rampal

According to section five of the Anti-Money Laundering and Combating the Financing of Terrorism Act 2020, a Reporting Entity which executes a cash transaction or wire transfer of SCR 50,000 or more (or equivalent amount in the currency of other countries) is obligated to submit the relevant report to the Financial Intelligence Unit.

Rampal said that however, "banks will continue to collect certain information on clients as this is very important to help FIU in their effort to fight money laundering and financing of terrorism."

Recently on Facebook, some Seychellois citizens were complaining about banks asking for the purposes of withdrawing or depositing on any amount even if it is less than the threshold.

The chairman of the Seychelles Bankers Association, Philip Moustache, said that now the information is clear so banks will be in a better position to implement the procedure accordingly.

"At the same time we are encouraging people to use alternative forms of banking such as using the ATM cash machine to facilitate their procedures and avoid frustrations," said Moustache.

As a member of the Eastern and Southern Africa Anti-Money Laundering Group, Seychelles, an archipelago in the western Indian Ocean, needs to be compliant and ensure that the country's regulations are in line with the financial action task force of the group.

It is for this reason that an Anti-Money Laundering and Combating the Financing of Terrorism Act 2020, and the Beneficial Ownership Act 2020 came into force in March 2020. In September last year, the Seychelles government launched a three-year programme to tighten the anti-money laundering (AML) legislation.