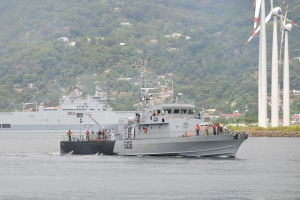 The first patrol boat, PS Topaz, was donated by the Indian government in 2005 to strengthen the strategic partnership between the two nations. (File photo: Patrick Joubert)

(Seychelles News Agency) - Seychelles is expected to receive a fast patrol vessel from the Indian government next month to help its coast guard with maritime surveillance, a top official said on Wednesday.

The chief of Defence Forces, Michael Rosette, told SNA that the vessel "will be used to do surveillance, rapid intervention and safeguarding our maritime areas, and also boost our fight against maritime piracy."

In his budget address on Tuesday, the Minister of Finance, Naadir Hassan, said that the "acquisition of the new patrol boat for the defence forces comes with an allocation of SCR 340 million ($16 million), financed by the Indian government."

Seychelles, an archipelago in the western Indian Ocean, has an Exclusive Economic Zone of 1.4 million square kilometres which makes it difficult for enforcement authorities to spot illegal activities at sea.

Rosette said usually officers would have been sent for a training course on how to navigate this type of vessel but "this has not been possible this time due to the COVID-19 pandemic, but training will be provided locally once the boat is in the country."

The fast patrol boat is the fourth vessel donated by the Indian government to the Seychelles archipelago in the western Indian Ocean.

The first patrol boat, PS Topaz, the Seychelles Coast Guard flagship, was donated by the Indian government in 2005 to strengthen the strategic partnership between the two nations. Seychelles was actively involved in anti-piracy operations between 2008 and 2012 when the western Indian Ocean was being threatened by the scourge.

PS Constant which is a fast attack ship was donated in 2014 and PS Hermes, an interceptor, in 2016.

According to the Times of India, the vessel has been built at the Garden Reach Shipbuilders and Engineers (GRSE) shipyard based in Kolkata.

"We shall be delivering the FPV soon. We already have the vessel ready. It will be the second ship to be exported by GRSE," a senior GRSE official told the Times of India.