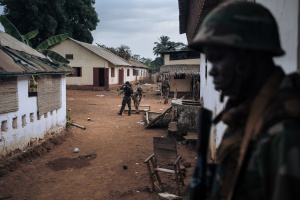 Central African Army (FACA) soldiers inspect their looted military base that was occupied by rebel militiamen in Bangassou on February 3, 2021, for the first time since the January 3, 2021 attack. On January 3, 2021, the city of Bangassou was attacked by hundreds of militiamen from the armed group coalition Coalition of Patriots for Change (CPC), causing tens of thousands of people to flee into the bush and neighboring DR Congo. Since the end of December 2020, the rebel coalition has taken control of the main roads and several of the country's major cities. (ALEXIS HUGUET / AFP)

(AFP) - UN Secretary-General Antonio Guterres has recommended adding thousands of additional security forces to the MINUSCA peacekeeping mission in the Central African Republic, according to a Security Council report obtained Tuesday by AFP.

"The Central African Republic is at a critical juncture that will determine if peace and stability will be restored and put on a firmer footing," Guterres said.

The reinforcements should be "sequenced and based on regular review of the evolving political and security context," he added.

MINUSCA is one of the UN's biggest peacekeeping operations in the world, with an annual budget approaching $1 billion.

"I recommend an increase of 2,750 military and 940 police personnel, bringing the authorized ceilings for MINUSCA to 14,400 and 3,020 respectively," Guterres said in the report.

Ahead of presidential elections in December, the UN Security Council authorised a two-month temporary deployment to Central Africa of about 350 mainly Rwandan peacekeepers, as well as two armed helicopters taken from the UN's mission in South Sudan.

Last week, the Security Council authorised a renewal for the temporary reinforcement until April 10.

This "has helped to address the challenging security situation," Guterres said, offering a rare acknowledgement to members of the Russian private security firm Wagner that has often come under criticism for its interventions.

The Security Council is next set to meet to discuss Central Africa on February 24.

"The objectives of this augmentation would be to control and reverse the current instability while incentivizing compliance with the Political Agreement," Guterres said.

"In the short and medium term, the requested reinforcements would comprise an additional battalion to secure the main supply route," towards Bangui, as well as "four quick reaction forces to provide intervention capacity to the four sectors, three companies to reinforce existing battalions," he added.

In the longer term, the requested reinforcements would include "additional horizontal engineering capacity for mobility and bridging, air assets for air-to-ground targeting" and unmanned reconnaissance drones.

In mid-December, six of the 14 armed groups that had occupied two-thirds of the Central African Republic since the start of the civil war in 2013 launched an offensive against the regime of President Faustin Archange Touadera.

He was re-elected at the end of December.