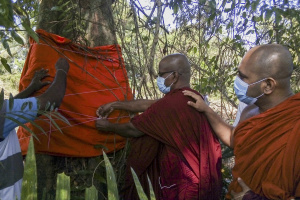 Buddhist monks tie a saffron robe around the trunk of the only known specimen of a Sri Lankan Legume or Crudia zeylanica tree to symbolically ordain it in an attempt to stop it from being felled to make way for a motorway, at the Gampaha district on the outskirts of the Sri Lankan capital Colombo on February 10, 2021. (AFP)

(AFP) - Sri Lankan Buddhist monks Wednesday ordained the world's only known specimen of a species of local tree, in an attempt to stop it being axed to make way for a motorway.

The Sri Lanka Legume (Crudia zeylanica) was first classified in 1868 and last found in 1911. In 2012 it was declared extinct until the surprise discovery in 2019 of a lone tree just north of Colombo.

But the eight-metre (26-foot) plant was set to be felled this week to allow the construction of a motorway to the central pilgrim city of Kandy until environmentalists raised the alarm and appealed for help.

Buddhist monk Thangalle Saarada hot-footed it to the site and together with several others on Wednesday blessed the plant and tied a saffron robe around its trunk while performing sacred chants.

"This tree is now symbolically a monk," Saarada said after tying the robe and sprinkling blessed water.

"We want to save the tree from the government."

The monks' mercy action is expected to save the tree, with Buddhism enjoying widespread respect in the island nation of 21 million people, where it is the majority religion.

Most people in fact will believe they will be cursed if they harm sacred plants.

"From a conservation point of view, it is extremely important that we save it from destruction," said Hiran Amarasekera, professor in Forestry and Environment Science at the University of Sri Jayewardenepura.

"It is not just the plant, but we need to save the entire eco system," Amarasekera told AFP.

Government spokesman Keheliya Rambukwella said they will take environmental concerns onboard and a final decision will be taken after further consultations.