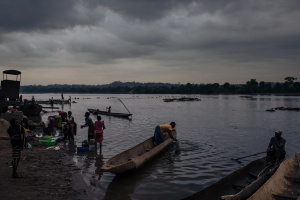 Central African refugees wash their clothes in the Mbomou River, which marks the border between the Central African Republic and the Democratic Republic of Congo, at Ndu on February 5, 2021. On January 3, 2021, the city of Bangassou was attacked by hundreds of militiamen from the armed group coalition Coalition of Patriots for Change (CPC), causing tens of thousands of people to flee into the bush and neighboring DR Congo. Since the end of December 2020, the rebel coalition has taken control of the main roads and several of the country's major cities. (ALEXIS HUGUET / AFP)

"A whaling barge overloaded with passengers and goods capsized at around 8 pm (1900 GMT) on Sunday on the Congo River 23 kilometres (14 miles) from Kinshasa," Charles Mbutamuntu, a spokesman for the provincial government, told AFP.

"So far we have recovered nine bodies and 103 survivors," he said, adding that other survivors could have returned to Kinshasa on their own.

"We don't have the exact number of people on board, but it is reported that nearly 600 passengers embarked, which suggests there are several missing.

"Residents told us that bodies are floating in the water. The toll could therefore increase in the coming hours," he added.

The boat involved was called a "baleiniere" or "whaler" -- a commonly-used flat-bottomed vessel between 15 to 30 metres (50 to 100 feet) long by two to six metres wide.

It was headed for Mbandaka, the capital of DRC's Equateur province, around 700 kilometres (435 miles) from Kinshasa.

The vast central African country has very few passable roads, so many travel along the Congo River and its tributaries.

Shipwrecks are frequent in these troubled waters, often with a high human toll.

The boats are often dilapidated and overloaded, with passengers not wearing life jackets and many of them not able to swim.

After a devastating shipwreck on Lake Kivu that killed 142 people, President Felix Tshisekedi announced in April 2019 that all passengers should wear life jackets.

But the requirement is routinely ignored.