President of Seychelles: Hotel development will continue despite protests 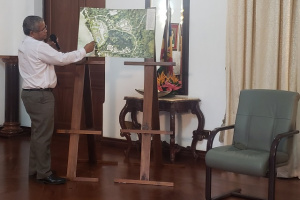 Ramkalawan explained that the road diversion will take about two minutes to travel along and will replace the current road that is constantly being threatened by the effects of climate change. (Rassin Vannier, Seychelles News Agency)

(Seychelles News Agency) - The Anse à la Mouche hotel development project will continue in its current form, the president of Seychelles said Monday after providing clearer information after objections made by concerned citizens.

The Seychelles' vice president highlighted the $250 million project will bring the island nation a needed injection of investment during the downturn brought about by COVID-19.

"The government has taken into consideration the development and the impact it will have on the environment and has seen that the project is one where the protection of the environment and development can happen in a good partnership, hence the government has no intension of stopping this project. The project will continue exactly in the form that it is currently," said Wavel Ramkalawan.

The announcement comes after three dozen residents of Anse à La Mouche peacefully protested against the development of the 120-room hotel on Saturday. The group expressed concerns that the development would affect the protection of the wetland, beach access, road diversion and livelihood of the inhabitants.

The Anse à la Mouche hotel development project is a mixed-use project that will comprise an area for tourism, retail, residential and entertainment. It is owned by the Anse La Mouche Development Company Seychelles (ALDMC) and will be developed by the Royal Development Company.

On February 8 a petition was submitted to the president with 145 signatories, with a note stating there is an online petition that at the time had gather over 940 signatures.

Responding to concerns raised over the destruction of the wetland in the area, Ramkalawan ensured the public that "no construction will take place in the area where the wetland is located."

He explained that the road diversion will take about two minutes to travel along and will replace the current road that is constantly being threatened by the effects of climate change.

"The current road will be turned into a promenade similar to that of Beau Vallon and no access will be denied to the beach," said Ramkalawan.

Answering questions of journalists during the press conference, Vice President Ahmed Afif said that the project will bring benefits in the short and long term. He said that when different local companies and individuals are assigned a job during the construction period, the government will collect additional taxes.

"This is an investment of $250 million in the first 24 months, which is considerable. If you take only 10 percent of the $250 million projects, the government will collect $25 million in a period of 24 months. During a time when you do not have foreign direct investment, $25 million in two years is considerable. When the hotel, which will have 160 rooms, opens, this will create 600 jobs, a percentage of which will be occupied by Seychellois," said Afif.

Talking about the pressure such a development will have on local infrastructures, Afif outlined that "the developers will be building their own utility plants hence will not be a pressure on PUC."

Afif also said that the project is not part of the moratorium imposed on the construction of large hotels with 25 rooms or more in Seychelles, an archipelago in the western Indian Ocean.

"We need to relook at the moratorium as everything is quite dynamic during this time that we need to attract investments. The most important criterion is to make sure that any project to be implemented is made in transparency in terms of what the government will give and will receive, and that Seychellois benefit through the project," said Afif.

"When we look at the fact that the environment will not be affected, that jobs and investments will be created, is it rational to stop such an investment? For me the answer is clearly no, on the condition that all regulations and laws of Seychelles are followed," he continued.

During his closing remarks, the president called on the environment ministry and the planning authority to relook at the EIA process so as to make sure all decisions taken by the government and future developers are properly communicated to the public.