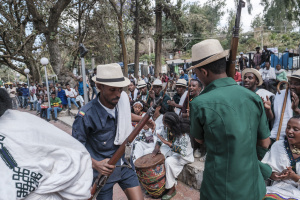 Tesfahun Mande (C), an Amhara militia fighter and member of a drama and traditional dance group, performs in a square during the preparations for the celebration of Timkat, the Ethiopian Epiphany, in the city of Gondar, Ethiopia, on January 17, 2021. In a typical year, Timkat in Gondar is a sunny, lighthearted affair, capped by a ceremony at 17th-century stone baths -- constructed during the time of Emperor Fasilides -- in which thousands of worshippers and tourists dive into holy water.
The event is a main driver of tourism in Gondar, the former seat of Ethiopia's royal empire, and in 2019 it earned a spot on UNESCO's list of Intangible Cultural Heritage of Humanity.
This year, however, is hardly typical for Ethiopia: The country is grappling with the conflict in Tigray as well as persistent ethnic violence in other regions and, most recently, simmering tensions along the border with Sudan.
The crises have inspired some officials and ordinary Ethiopians to turn the event into a celebration of military might, using public statements and performances to project strength and issue warnings to would-be enemies. (EDUARDO SOTERAS / AFP)

Artillery attacks by forces backing Prime Minister Abiy Ahmed, the 2019 Nobel Peace Prize winner, "struck homes, hospitals, schools and markets", according to the report, which focuses on the regional capital Mekele and the towns of Shire and Humera.

"At the war's start, Ethiopian federal forces fired artillery into Tigray's urban areas in an apparently indiscriminate manner that was bound to cause civilian casualties and property damage," said Laetitia Bader, HRW's Horn of Africa director.

The report calls for a UN investigation of possible laws of war violations.

Abiy announced military operations against the leadership of Tigray's ruling party, the Tigray People's Liberation Front (TPLF), in early November, saying this was in response to TPLF-orchestrated attacks on federal army camps.

He declared victory after pro-government troops took Mekele in late November, though the TPLF vowed to fight on, and aid workers say persistent insecurity has hampered the delivery of badly-needed humanitarian assistance.

Abiy has previously said the military acted with special care for civilian lives, telling lawmakers in late November that no civilians were killed as his forces entered Tigray's cities.

His office did not immediately respond to a request for comment Thursday.

Thousands have died in the conflict in Tigray, according to the International Crisis Group, and tens of thousands of refugees have streamed across the border into Sudan.

In the western town of Humera, doctors reported that at least 46 people were killed and 200 injured on a single day during the first week of fighting, HRW said, adding that "total casualties that day were most likely higher".

"Civilians started arriving in the hospital with injuries to the abdomen, chest, head. We were at a loss," HRW quoted a doctor as saying. "People with no hands, people with their stomachs hanging out."

A doctor at a hospital in Mekele has previously told AFP that 27 civilians were killed in "artillery and rocket shelling" on November 28, the day federal forces arrived, and that more than 100 were wounded.

"Many of the artillery attacks did not appear aimed at specific military targets but struck generalised populated areas," HRW said.

Much of Tigray remains inaccessible to aid workers and the media, making it difficult to get a full picture of the toll of the fighting and current conditions on the ground.

Ethiopia "should promptly allow UN investigators into Tigray to document the conduct by warring parties in a conflict that has devastated the lives of millions and should no longer be ignored," Bader said.

Fears are growing of a humanitarian catastrophe in Tigray, with the UN warning this week that conditions were "extremely dire" and that "needs have outpaced our capacity to respond."

At a press conference on Wednesday, Abera Tola, head of the Ethiopian Red Cross Society, said that 80 percent of Tigray was "unreachable" and warned that tens of thousands of people could starve to death.

"That is why we are appealing to the public and international community to fill the (gap)," the statement said.

The government says it is working to provide humanitarian assistance to all who need it in Tigray, while expanding access for aid workers as the security situation allows.