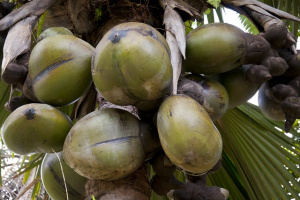 The coco de mer is the world's biggest nut and grows naturally in Seychelles. (Gerard Larose, Seychelles Tourism Board)

(Seychelles News Agency) - The Seychelles Islands Foundation (SIF)  recorded an increase in the poaching of the endemic coco de mer in the Vallee de Mai special reserve on Praslin for the year 2020 during restrictions on movement to curb the increase of COVID-19 infections.

The Foundation which manages the site recorded 50 poaching incidents between April and August when restrictions on movement were imposed in Seychelles after the island nation started recording positive COVID-19 cases. There were only two such poaching incidents in 2019.

"Based on the drastic decrease in tourists and many people losing income from the ongoing pandemic, we surmise that more people are desperate to find alternative means of income, even if this means being involved in illegal activities," said Fleischer-Dogley, SIF's chief executive.

The coco de mer, the world's biggest nut which grows naturally on in Seychelles, an archipelago in the western Indian Ocean, is a dioecious species which means it has both a male and female plant. It is already on the International Union for Conservation of Nature (IUCN) Red List of threatened species.

Aside from Praslin, the nut grows naturally on only one other island, Curieuse, a national park located very close to Praslin. Its status as king of the palms and a giant in the plant kingdom makes it a major attraction for holidaymakers.

Fleischer-Dogley said Vallee de Mai is the most targeted place for poachers and very well-known for its considerable coco de mer population.

"This prominence attracts unwanted attention, making it vulnerable to planned and opportunistic poaching. Also, unlike other places where it grows abundantly, the Vallee de Mai is more accessible to people," she told SNA.

The nature reserve is the most visited natural site in Seychelles and receives around 115,000 visitors per year.

In an interview with SNA in December, Emeline Lafortune, a project officer at SIF said that "given the implications of COVID-19 on the highly unique and sensitive ecosystem of the Vallee de Mai and the restricted income due to the lack of tourism, the monitoring, research and recreational activities that bring value to this nature reserve has been compromised immensely."

Fleischer-Dogley said that the coco de mer nuts have always been prized possessions, not only for decorative purposes but also as a delicacy and to be planted on people's private property. It is possible that continued demand for these nuts is being now met by illegal suppliers.

She said that poaching of the coco de mer is very saddening as a few people are robbing their community's natural heritage and prosperity by endangering the regeneration of a sensitive and vital endemic plant.

As per the amended coco de mer (Management) Decree, convicted poachers are liable to be imprisoned for a term not exceeding two years or to a fine not less than SCR25,000 and not exceeding SCR500,000.

Meanwhile, in 2018, a three-month national census conducted where coco de mer trees are found, except for Curieuse Island, revealed that there are about 8000 healthy trees. The census was undertaken by the Ministry of Environment was to provide updated information to allow better management and ensure the survival of the species.