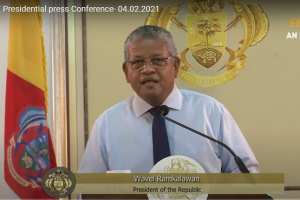 The president also invited Seychellois who have doubts about his plans for a major reorganisation of Air Seychelles to invest their personal funds in the airline. (SBC YouTube)

(Seychelles News Agency) - In his first live press conference since being elected to Seychelles' top office, President Wavel Ramkalawan gave another warning to those in the illegal drug trade that his administration would be clamping down, as the recent deportation of a Kenyan national on drug charges shows.

The president also invited Seychellois who have doubts about his plans for a major reorganisation of Air Seychelles to invest their personal funds in the airline, a reminder that the organisation is struggling financially.

In his Thursday night remarks, Ramkalawan said that all procedures were followed in the deportation of the Kenyan female on drug-related offences as he gave a shot across the bow to drug traffickers.

"The woman is one of the biggest drug traffickers in our country and everyone knows but action was never taken. The police arrested the woman in an operation and after procedures were followed she was deported," he added.

The president said that there has been interaction between the police from Seychelles and Kenya and that upon arrival in her homeland, the Kenyan national was handed over to the police.

On the subject of Air Seychelles, he said he appreciated the debate on Air Seychelles by members of the National Assembly and that news reports by various media houses have also helped inform the Seychellois public.

"I would like to ask the media to go further in your investigative work find out if there are any Seychellois who would be interested to invest in this airline and other investors who would like to inject their money in the airline," he said.

He added that at this point in time no decision has been taken.

In his State of the Nation, Ramkalawan had stated that Air Seychelles owes more than SCR800 million ($38 million) in debts and today the company cannot sustain itself.

On the issuing of Seychellois citizenship, Ramkalawan said, "I will not be issuing any citizenship as this falls under my responsibility. The only instance that a foreigner can receive nationality is if the person gets married to a Seychellois and are settled and stable."

He added: "The issue of citizenship is very important. Perhaps this is one of the reasons why Seychellois cannot enter the United States without a visa. This is a point on my agenda with the US government."

The head of state of Seychelles, an archipelago in the western Indian Ocean, also talked about the issuing of Gainful Occupation Permit (GOP) to foreign workers and said that "we know exactly how many foreign workers whose contract have terminated in January, but are still in the country."

"We are reviewing the certificate of entitlement allowing tourism establishments to have a certain number of foreign workers who are not available on the labour market. We want Seychellois to be the priority and occupy those posts... We are going to be more serious with giving new GOPs, but if Seychellois does not want to work, automatically businesses will seek out for foreign workers," he added.