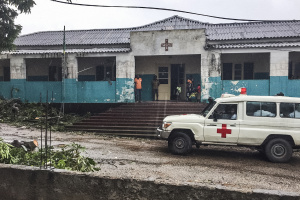 Patients wait for medical help outside of the Macomia health centre, northern Mozambique on March 28, 2019. Mozambique has registered 42,488 positive cases nationwide, about half of which were recorded in January. More than half of the 427 deaths were also recorded last month.(GREGORY WALTON / AFP)

(AFP) - About two million Mozambicans in the epicenter of the country's coronavirus breakout will from Friday adhere to a curfew for the first time since the civil war ended in 1992, President Filipe Nyusi announced Thursday.

The southern African nation's decision to impose a 9:00 pm to 4:00 am curfew in the Great Maputo area -- which includes the cities of Maputo, Matola, Marracuene and Boane -- comes as the national health system buckles under rising infections.

Mozambique has registered 42,488 positive cases nationwide, about half of which were recorded in January. More than half of the 427 deaths were also recorded last month.

The strict curfew will run from February 5 until March 7, Nyusi said in a televised address, blaming a poor adherence to measures previously imposed.

"Mozambique was once an example of managing Covid-19 in Africa and we were praised for our ability to stop the first wave of infections from Covid-19," said President Nyusi calling for compliance with the measures.

"But now we are one of the countries with one of the fastest increases in cases in Africa."

As of Thursday, the capital Maputo and neighbouring Matola city were the epicentre of infections, with more than 11,000 active cases out of around 16,000 across the country of over 30 million people, putting pressure on the country's health system.

In addition to the curfew, the new restrictions include a ban on all religious services, the suspension of all face-to-face classes, the prohibition of private events except for weddings and the suspension of sports activities including professional football championships.

Curfews were frequently imposed at the end of the civil war in 1992 due to the threat of attacks by Renamo militias.