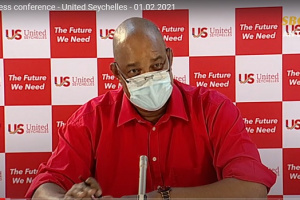 Patrick Herminie, 58, was elected as the new president of United Seychelles in elections that took place over four days. (SBC YouTube)

Patrick Herminie, 58, was elected as the new president of United Seychelles in elections that took place over four days in view of the restriction of movement to curb the spread of COVID-19 in the country.

Herminie told a press conference that "the aim of the new leadership is to reconstruct our party and make it the force that it was for many years, to ensure that in Seychelles during the next five years we have a very strong opposition and finally put us in a position to contest in the 2025 election."

He said that US is a strong opposition eyeing executive and legislative power in the 2025 election.

Herminie said that the achievements made by United Seychelles in education, health, the welfare system and developments such as Air Seychelles are being threatened by a neoliberal government -- Linyon Demokratik Seselwa (LDS) -- that thinks everyone should fend for themselves.

"We are worried about what is happening, and together with many Seychellois workers, we are feeling the effects of the bad policy decisions that are being taken by the liberal government," said Herminie.

Herminie and his team also answered questions on several developments in Seychelles, an archipelago in the western Indian Ocean.

On Ramkalawan's State of the Nation Address (SONA), Herminie he said that the address was a "disappointment for the simple reason that we did not hear anything about the state of our health, education, blue economy, energy, the country's security or on the problem that is affecting the people the most and that is the cost of living."

"We have seen a lot of hypocrisy in this SONA. Threats have been made towards drug traffickers and we were expecting the president to come and talk to us about the dialogue he is having with traffickers on how to stop drug trafficking in Seychelles. Isn't that what he told us before the election? He didn't say if the dialogue has failed," he added.

In responding to the comments made by Herminie, the leader of the Linyon Demokratik Seselwa, Roger Mancienne, told SNA that “LDS is prepared to respect some of the views and the newly proclaimed leadership of United Seychelles as the opinion of the political opposition to decisions taken by the present government. It is testimony that we are in a free democratic system.”

“These newly established leaders suffer from wilful political amnesia. They put aside or forget what is inconvenient to them and claim credit where it is not due,” said the LDS leader and added that “the most regrettable failure is to claim what our country is today as the achievement of their party when they were for so long the ones who created barriers to these achievements.”

Another member on the United Seychelles executive committee, Jacquelin Dugasse, responded to a question on the future of Air Seychelles.

"It seems that the government intends to shut down Air Seychelles and I think that the decision has already been taken to do so. This, to me, seems like a rushed decision. On our side we have concluded that the president has taken this dossier and has passed it to the National Assembly, and I think that he is not doing the National Assembly justice as a decision has already been taken," said Dugasse.

"I would ask that there is a national debate and that Air Seychelles is given the chance to present its case and give ex-CEO and ex-chairman of Air Seychelles who ran the company to explain the situation. We also need to look at what happened between 2011 to date," he added.