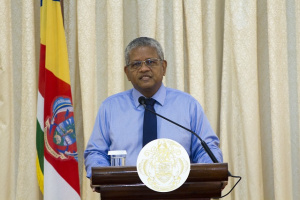 Ramkalawan announced the reforms in an address marking 99 days since he became president. (State House)

(Seychelles News Agency) - The Seychelles Tourism Board (STB) will fall under marketing and promotion in the tourism ministry in the first phase of government reforms announced by President Wavel Ramkalawan on Monday.

"The new Department of Tourism will be overseen by a Principal Secretary. The board of STB will be replaced by an advisory council providing advice to the ministry," said Ramkalawan in an address marking 99 days since he became president.

"During these times we have had the opportunity to look at the different structure of institutions in the country. This include in the public administration as well as all the different agencies and other organisations," said Ramkalawan.

"As you will recall, I did mentioned about some changes that will need to take place during my SONA and today's announcements is a reflection of what the government has already decided  based on  competences, impartiality and efficiency," he added.

Two other agencies which will fall under the parent ministry are the Seychelles Agricultural Agency and National Biosecurity Agency which will be merged within the Department of Agriculture as two divisions. However, to ensure the border control function, the post of chief biosecurity officer will be created.

The National Botanical Gardens Foundation and Seychelles National Parks Authority will also be merged into a new entity: the Seychelles Parks and Gardens Authority, and a commercial board will be created.

In the new reforms all posts of special advisors will be abolished and some boards overseeing some institutions will be phased out completely or restructured.

Ramkalawan said that immediately after these changes, the country will be making a saving of SCR12.6 million ($595,000) on boards that were costing SCR36 million ($1.7 million) per month.

One of the boards that had been dissolved is for the Anti-Corruption Commission which will now be turned into a council.

"Members on the present commission will have to take their retirement. The 1.8 million rupees ($85,000) being used to pay those members will be used to make the council more efficient," said Ramkalawan.

The Commission was established under the Anti-Corruption Act 2016 which gave it authority to investigate, detect and prevent corrupt practices.

The president said that with the reform the council "will be tasked with the responsibility to administer declaration of assets from public officials and constitutional appointees. This will facilitate investigation if there is any case of corruption."

Some board has now new members with appointments based on recommendations from each parent ministries.

Ramkalawan has urged other high officials in government who are not being changed to carry on with their normal duty.