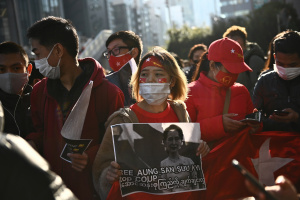 A group of Myanmar activists protests outside outside the United Nations university building in Tokyo on February 1, 2021 following a military coup in the country by a general after arresting civilian leader Aung San Suu Kyi and other senior officials. (Philip FONG / AFP)

The intervention ended a decade of civilian rule in Myanmar, with the military justifying its power grab by alleging fraud in the November elections that Suu Kyi's National League for Democracy (NLD) party won in a landslide.

Suu Kyi and President Win Myint were detained in the capital Naypyidaw before dawn, party spokesman Myo Nyunt told AFP, just hours before parliament was meant to reconvene for the first time since the elections.

The military then declared, via its own television channel, a one-year state of emergency and announced that former general Myint Swe would become acting president for the next year.

It alleged "huge irregularities" in the November polls that the election commission had failed to address.

"As the situation must be resolved according to the law, a state of emergency is declared," the announcement said.

Suu Kyi issued a pre-emptive statement ahead of her detention calling on people "not to accept a coup", according to a post on the official Facebook page of the her party's chairperson.

The military moved quickly to stifle dissent, severely restricting the internet and mobile phone communications across the country.

In Yangon, the former capital that remains Myanmar's commercial hub, troops seized the city hall just ahead of the announcement, according to an AFP journalist.

AFP saw several trucks in Yangon carrying army supporters, with Myanmar flags and blaring nationalist songs, and some NLD members reported that security forces had ordered them to stay at home.

All banks across the country were also closed, and queues formed at ATMs.

However, the military did not deploy masses of troops onto Yangon's streets.

The United States, the United Nations and Australia quickly condemned the coup, calling for a restoration of democracy.

"The United States opposes any attempt to alter the outcome of recent elections or impede Myanmar's democratic transition, and will take action against those responsible if these steps are not reversed," White House spokeswoman Jen Psaki said in a statement.

Australia said the military was "once again seeking to seize control" of the country.

"We call on the military to respect the rule of law, to resolve disputes through lawful mechanisms and to release immediately all civilian leaders and others who have been detained unlawfully," Australian Foreign Minister Marise Payne said.

Myanmar's November polls were only the second democratic elections the country had seen since it emerged from the 49-year grip of military rule in 2011.

The NLD won more than 80 percent of the vote -- increasing its support from 2011.

Suu Kyi, 75, is an immensely popular figure in Myanmar for her opposition to the military, having spent the best part of two decades under house arrest during the previous dictatorship.

But the military has for weeks complained the polls were riddled with irregularities, and claimed to have uncovered over 10 million instances of voter fraud.

It had demanded the government-run election commission release voter lists for cross-checking -- which the commission did not do.

Suu Kyi's previous opposition to the military earned her the Nobel peace prize.

But her international image was shredded during her time in power as she defended the military-backed crackdown in 2017 against the country's Muslim Rohingya community.

About 750,000 Rohingya were forced to flee into neighbouring Bangladesh during the campaign, which UN investigators said amounted to genocide.

Suu Kyi went to the United Nations to defend Myanmar against the allegations.

Suu Kyi was only ever de facto leader of Myanmar as the military had inserted a clause in the constitution that barred her from being president.

The 2008 constitution also ensured the military would remain a significant force in government by retaining control of the interior, border and defence ministries.

But to circumvent the clause preventing her from being president, Suu Kyi assumed leadership of the country via a new role of "state counsellor".

"From (the military's) perspective, it has lost significant control over the political process," political analyst Soe Myint Aung told AFP.