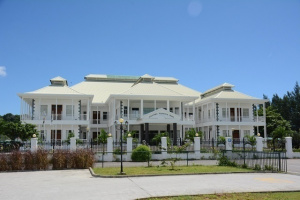 The two leaders gave their responses on Monday. (Joena Meme)

(Seychelles News Agency) - The two leaders in the Seychelles' National Assembly on Monday responded to the State of the Nation address of President Wavel Ramkalawan.

The Leader of the Opposition, Sebastien Pillay, said that the president did not outline the real plans of the new government to address and overcome the current situation the country is facing.

Pillay said people are living in uncertainty as the number of positive COVID-19 cases increase amid the already existing economic difficulties.

"The state of our nation is one where businesses and the private sector are questioning the government's plan. The state of the nation is where many public servants are unsure if they still have a job; these are what the president should have addressed," he said.

In his first State of the Nation address on Friday, President Ramkalawan said he sees the island nation overcoming the setbacks of COVID-19, more jobs for Seychellois and he signalled big changes could be coming for Air Seychelle.

The Leader of the Opposition said that it is important for the Seychellois society to have at heart those that are more vulnerable and that people's social conditions should not be used against them.

"Much has been said on the fact that we have 40 percent poverty rate in Seychelles. Is this no longer the case? At this moment where there is a depreciation of almost 70 percent of our rupee, an egg cost 4.50 rupees. Many families are having difficulties to make ends meet. This is not the time to play politics with people's belly," said Pillay.

He added that the economic measures to be taken by the government need to be clear and that making vague statements does not inspire confidence.

"I maintain that all possible measures are taken to reduce expenditures even for capital projects and that emphasis is on the guarantee that no Seychellois sleeps on an empty stomach," Pillay said.

He added that the president did not talk on the plan of the government for the fishing and agriculture sectors to ensure that they continue to function, food security and where it is on the importation of food products.

"We also ask the government at this point to give us a feedback on the renegotiation of the fishing agreement with the European Union and tell us what has happened until now and what they are going to do next," said the Leader of the Opposition.

Pillay raised the subject of lowering the cost of living and said that nothing was said on how the government is going to do this.

"I would also like to know how far the government has got in getting appropriate middlemen that will help reduce the cost of goods imported by the STC (Seychelles Trading Company).

He recommended that the Ministry of Finance looks at a regulation from 1958 on the control of services and supplies act.

"The law makes provision that in an emergency situation like we are in today the president has legal recourse to control certain services and even subsequently control on prices," said Pillay.

Pillay expressed his concern on the fact that in the 89 days that Ramkalawan has been leading the new government, the number of COVID-19 cases has exploded in Seychelles, an archipelago in the western Indian Ocean.

If there is one thing that characterizes the government and does not help bring unity but spread confusion are the statements made, said Pillay.

"The ministers after their visits say they are satisfied with the development and work they are seeing and the president describes his staff as professional but then in front of this assembly he describes our country as a broken carriage," he added.

On the government's decision to dissolve the board of the Anti-Corruption Commission (ACCS) and the fate of Air Seychelles left to be decided by the National Assembly, Pillay said that both the ACCS and Air Seychelles should have the opportunity to come to the Assembly and say what is happening.

He also talked about the Gainful Occupation Permit (GOP) and said that this need to be looked into because it is being used with the excuse that Seychellois are lazy. He proposed that instead of a policy, GOP should have a clear legal status how this will be administrated and even limit those to certain sectors.

On the subject of drug abuse, Pillay said that "the government has to take action not just talk about it and to help I ask that the government gives FIU (Financial Intelligence Unit) the mandate to conduct investigations that will complement what the financial crime intelligence unit at the police is doing. Reform the ANB (Anti-Narcotics Bureau) in an independent agency with legal status under the Ministry of Internal Affairs."

He also called on the Seychellois people to "stop taking risks with our lives and stay home. We all need to take our responsibilities seriously."

On his side, the Leader of Government Business, Bernard Georges, said that the president has accomplished his task to the fullest when he made his State of the Nation Address on Friday.

"The reason behind having a head of state come before the National Assembly once per year to talk about the state of the nation (SONA) is for the head of state, with an eye on the past, to look ahead as well. SONA is at the same time an audit on the past and a map for the future. Based on this interpretation, the president has not gotten off track and has accomplished his task fully," said Georges.

He outlined that President Ramkalawan chose not to follow the usual style to make a speech that touches on all domains and explore each of them in the context of the country as compared to all other SONA addresses made until last year.

"He chose to speak directly to the people in an informal but strong manner, realistic and frank, without softening anything. Why did he choose this style? It is because his main message was that life has changed for Seychellois and we need to recognise this and live in this new place COVID has placed us. In a sense, the president had to find a way to give us all a shock, and have us realise that we all need to live our lives in another way," said Georges.

The Leader of Government Business also said that one of the main themes in the president's address was the need for the country to move away from the welfare system that the country has lived under for the past 40 years.

He explained that in the past "all responsibilities were taken up by the government and even if you worked or didn't, you were supported by the national budget." We need "to enter a system where each citizen is being called to take his or her individual responsibility and get what they need, not by filling out a welfare form but by getting up and going to work."

"In a nutshell, this is the change that has happened and this is the philosophy of the new administration. Naturally, those who can't will need to be assisted however, these are exceptions and not a substitute for work," said Georges.