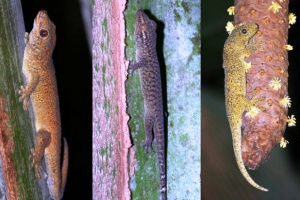 The Cabinet of Ministers has approved new regulations to protect two reptiles endemic to Seychelles from exploitation and trafficking.
The cabinet approved the regulations for the giant bronze gecko and the Seychelles tiger chameleon on January 6. On the same date, the cabinet approved the drafting of the Trade in Wild Fauna and Flora Bill, 2020.  The bill would allow for the protection of specified wild animal and flora and would prohibit the capture, possession or trade in these species.
The giant bronze gecko, a lizard species with leathery, wrinkly skin, is endemic to Seychelles' second-most populated island – Praslin.  The Seychelles tiger chameleon is an endangered species of chameleon found only on the islands of Mahé, Praslin and Silhouette.
Both species, very popular among visitors to the UNESCO world heritage site, Vallee de Mai, are at risk of exploitation as they are being stolen and sold on international black markets.
The senior legal officer at the Department of Environment, Sharon Gerry, said that the department has received information that these two species are being traded illegally.
“Their value on the black market is high. We would like these illegal transactions to stop, hence why we found the necessity to have these two regulations specifically for these two specific species,” said Gerry.
These very rare animals are currently regarded as one of the holy grails amongst reptile collectors and are consequently being traded for thousands of Euros each, online and at international reptile fairs.
“Both the regulations and the approved bill are geared towards the conservation of our species and protected zones. The law that talks about nature reserves and conservancy act were being worked on for many years. A lot of consultation has been carried out with stakeholders, especially with entities that manage these protected zones,” said Gerry.
Once made a law, the Trade in Wild Fauna and Flora Bill, 2020 will protect all species found in Seychelles.
“We signed the CITES convention that covers trade in endangered species in 1977 and since then we didn’t have any specific law that adopted some of the principles of this convention. There have been different laws that we have used to protect different species, but they are not enough. Aside from this new law that will curb the illegal trade of wildlife in Seychelles a little, we have the intention to revise our existing laws, such as the Wild Animals and Birds Protection Act,” explained Gerry.
CITES (the Convention on International Trade in Endangered Species of Wild Fauna and Flora) is an international agreement between governments. It aims to ensure that international trade in specimens of wild animals and plants does not threaten their survival.

These very rare animals are currently regarded as one of the holy grails amongst reptile collectors and are consequently being traded for thousands of Euros each, online and at international reptile fairs.