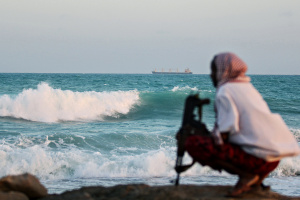 Photo taken on January 4, 2010 shows an armed Somali pirate keeping vigil on the coastline at Hobyo, northeastern Somalia, while the Greek cargo ship, MV Filitsa is anchored just off the shores of Hobyo where it is held by pirates since being captured on November 10, 2009. The Marshall Islands-flagged ship with its crew of 22, including three Greek officers and 19 Filipinos was captured some 513 nautical miles northeast of the Seychelles as it was sailing from Kuwait to Durban in South Africa loaded with fertilizer. (AFP PHOTO/ MOHAMED DAHIR)

A total of 195 incidents of piracy and armed robbery were reported, up from 162 in 2019, the International Maritime Bureau (IMB) said in its annual report.

Out of 135 sailors abducted globally last year, 130 of them were recorded in the Gulf of Guinea off West Africa -- the highest ever number of crew members kidnapped in the region.

The gulf stretches thousands of kilometres from Angola in the south to Senegal in the north, and its waters are considered among the world's most dangerous for piracy.

IMB director Michael Howlett said the surge in kidnappings showed "the increased capabilities of pirates in the Gulf of Guinea with more and more attacks taking place further from the coast".

Pirates have shifted from hijacking tankers for oil to the more lucrative kidnapping of sailors for ransom in recent years, added Noel Choong, head of the Kuala Lumpur-based IMB piracy reporting centre.

Choong said the abductions were increasing at an "alarming rate" and appealed to West African countries to step up patrols.

The Gulf of Guinea has now eclipsed the Gulf of Aden, off Somalia, as Africa's piracy hotspot.

The countries in the region -- with the help of the US and France -- have been trying for several years to increase collaboration and bolster their means of intervention.