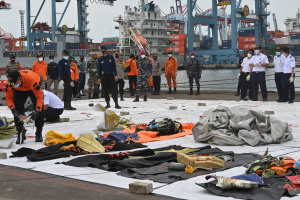 Members of the search and rescue teams display pieces of wreckage from Sriwijaya Air flight SJ182 at Tanjung Priok port, north of Jakarta, on January 11, 2021, which were recovered during search operations off the coast for the Boeing 737-500 which crashed into the Java Sea minutes after takeoff on January 9. (ADEK BERRY / AFP)

(AFP) - Indonesian divers searched waters off Jakarta Monday for black boxes from a passenger jet that crashed at the weekend with 62 people aboard, as investigators took up the grim task of identifying victims' remains.

Retrieving the boxes -- cockpit voice and flight data recorders -- will likely help explain why the Sriwijaya Air Boeing 737-500 plunged about 10,000 feet (3,000 metres) in less than a minute before slamming into the Java Sea.

Investigators have so far been unable to say why the 26-year-old plane crashed just four minutes after takeoff from Jakarta, but they do know the location of the black boxes.

The plane's captain, Afwan, a 54-year-old father of three, who like many Indonesians goes by one name, was a former air force pilot with decades of flying under his belt, according to local media.

Some of the 2,600 personnel working in the recovery effort involving dozens of boats and helicopters are hauling body parts, twisted piece of wreckage and passengers' clothing from shallow waters about 23 metres (75 feet) deep.

Body bags filled with human remains are being taken to a police hospital where investigators hope to identify victims by matching DNA from their remains to living relatives.

Rapin Akbar, who gave a blood sample to the hospital, had five relatives on board including an older sister, a nephew and his wife and their seven-month-old baby.

They were flying back to Pontianak, the city on Indonesia's section of Borneo island which had been flight SJ182's destination, about 90 minutes away.

"(My nephew) had planned to go back to Pontianak on Sunday but changed his mind and decided to fly on Saturday instead," the shocked Akbar told AFP.

"He called me to say the flight was delayed and sent me a picture of their baby. It was (their) first."

All 62 passengers and crew aboard the half-full flight were Indonesian. The count included 10 children.

Despite the name, black boxes are usually bright orange with reflective stripes, and all commercial planes are obliged to have them on board.

They're built to survive at vast depths and in extreme heat, and are fitted with a beacon which can emit a signal for one month.

The devices record information about the speed, altitude and direction of the plane as well as flight crew conversations.

The probe into Saturday's crash -- the latest in a string of disasters for Indonesia's aviation sector -- is likely to take months.

Aviation analysts said flight-tracking data showed the plane sharply deviated from its intended course before it went into a steep dive, with bad weather, pilot error and mechanical malfunction among the potential factors.

"Something quite dramatic has happened after takeoff," said Stephen Wright, professor of aircraft systems at Finland's Tampere University.

"The airspeed is far too low. The aircraft didn't accelerate up to the correct speeds for continuous flight."

Sriwijaya Air, which flies to destinations in Indonesia and Southeast Asia, has said little about the plane, which was previously flown by US-based Continental Airlines and United Airlines.

The Indonesian carrier has not recorded a fatal crash since it started operations in 2003.

But the Southeast Asian nation's fast-growing aviation sector has long been plagued by safety concerns, and its airlines were once banned from entering US and European airspace.

That accident -- and another in Ethiopia -- saw Boeing hit with $2.5 billion in fines over claims it defrauded regulators overseeing the 737 MAX model, which was grounded worldwide following the accidents.

The 737 model that went down Saturday was first produced decades ago and was not a MAX variant.

In 2014, an AirAsia plane headed from Surabaya to Singapore crashed with the loss of 162 lives.

A year later more than 140 people, including scores on the ground, were killed when a military plane crashed shortly after take-off in Medan on Sumatra island.