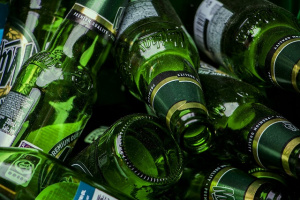 The new scheme will encourage the public to redeem their glass bottles after use instead of throwing them in the trash or into the environment. Laure said that many bottles found in the environment today are those that contained alcohol. (Simeon Berg/Flickr) Photo License: CC BY 2.0

(Seychelles News Agency) - In a bid to encourage recycling and minimize the amount of waste in Seychelles' landfills, a deposit of $0.10, or SCR2, will be applied to bottles of alcohol entering the country as of January 18, said a top official.

In a press conference on Wednesday, the director-general of Waste Enforcement and Permit from the Ministry of Environment, Nanette Laure, told journalists that since 2018, there has been a $0.10 deposit on each bottle of alcohol entering the country. But the implementation of the scheme was delayed.

"We had envisaged starting the scheme on January 18, if everything works according to plan depending on the COVID-19 pandemic situation," said Laure. Only bottles such as imported beer, wine, and other spirits can be redeemed under the scheme. Laure said that bottles that are broken will not be accepted.

People will get $0.05 (SCR1) on each bottle after redeeming it. In total, six redemption centres have been allocated on the three most populated islands of Seychelles. Given logistics and COVID–19 measures in place, the authority is advising people to book for an appointment before redeeming their bottles.

The glass bottles redemption system is not new to Seychelles. Some local companies such as Waterloo, Seybrew and Takamaka Rum among others have a redeem scheme for their products and they will be exempted from the levy.

The new scheme will encourage the public to redeem their glass bottles after use instead of throwing them in the trash or into the environment. Laure said that many bottles found in the environment today are those that contained alcohol.

Aside from sustaining the redeem system, the $0.10 deposit is part of the government’s initiative to better manage waste as the first and main landfill on Providence, on the eastern coast of the main island of Mahe, was closed and a second one opened in 2017 to cater for the amount of waste.

“The bottles being redeemed at the centres will then be crushed and recycled. The powder produced from the crushed glass bottles will be used as an alternative to cover the landfill as coral fill is not enough at times,” said Laure.

All landfills in Seychelles -- a group of 115 islands in the western Indian Ocean -- are government-owned. On average, a landfill like the one that was closed received 45,000 tonnes of waste per year since 1999 with a maximum of 75,538 tonnes recorded in 2010. In 2005, it was estimated that the landfills on Praslin and La Digue received 3,500 tonnes and 670 tonnes respectively per year.