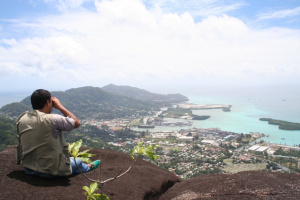 The year 2020 was meant to be a milestone year for Seychelles. The island nation was to celebrate its 250th anniversary since the arrival of the first settlers in August 1770. A year-long slate of activities initiated in August 2019 was planned. But all those grand plans were shelved after the arrival of COVID-19.

With the global pandemic raging in the world, life on earth slowed down as people had to adapt to a new, more isolated normal. But despite this, island life continued, and SNA now shares with you six important national events that occurred in Seychelles – 115 islands in the western Indian Ocean – in 2020.

March 14. The sweeping global virus reached the island nation when two Seychellois nationals returning home from Italy tested positive for COVID-19. The first cases forced the island nation to go into full prevention mode and where people had to learn the new normal.

Physical distancing, frequent hand washing or sanitizing and wearing masks became the normality of everyday life. The new normal resulted in hand sanitisers being wiped out from the stores and emerging new businesses of creating washable masks for adults and kids.

A first in the modern history of the island nation, Seychelles went into lockdown amidst the threat of the COVID-19 pandemic. The national lockdown saw the total shutdown of the country and its borders to the outside world.

The airport, schools, government offices and businesses were closed for a month leaving only the essential services to protect the population from the spread of the virus.

Ramkalawan won the presidency with 54.9 percent of the valid votes. He took the oath of Allegiance and Presidential Oath on October 26 in front of his family, party members, outgoing President Danny Faure and other dignitaries.

Prior to the 2020 elections, Ramkalawan had lost the elections six times. His party, LDS, won 20 out of the 26 directly elected seats in the National Assembly and five proportionately elected seats.

The judiciary, the National Assembly and the Roman Catholic Church - the main church in Seychelles – also had new leadership installed in 2020.

Following the October elections, Roger Mancienne – the Leader of the opposition party Linyon Demokratik Seselwa (LDS) -became the new speaker of the National Assembly. LDS won two-thirds of the seats and Mancienne was LDS' proportionate member.

The new Chief Justice of Seychelles, Rony Goviden, was sworn in on November 9. Govinden becomes the fourth Seychellois to assume the position. He succeeds Mathilda Twomey, whose mandate ended in September. Aged 49, Govinden graduated with an LLB (Hons) Degree at the University of Mauritius in 1996.

After 250 years, history of Seychelles corrected

We were all taught in history at school that Lazare Picault, a Frenchman who gave the main island its name, disembarked at Baie Lazare, a district named after him. According to history after more than three months at sea the French captain from Ile de France anchored his boat 'Elizabeth' off a south-west beach of the largest island of the archipelago.

He named it Mahé, in honour of Bertrand Jean Francois Mahé de la Bourdonais, the Governor-General of Ile de France (Mauritius) at that time. For a while now there has been a fierce debate on where Lazare Picault actually disembarked when he landed on Mahe in 1742. In November the National History Museum of Seychelles confirmed that as per records and landmarks such as the bay documented, he landed in the neighbouring district of Anse Boileau. We await the next chapter: will the two districts exchange names?

Judge Mathilda Twomey became the first Seychellois to be awarded a Human Rights Prize from the French and German governments. The French Ambassador to Seychelles, Dominique Mas, announced the award for Twomey at a reception on the occasion of the International Human Rights Day on December 10.

Judge Twomey was one of 15 people in the world to receive the prize for their work in the protection of minors. The Franco-German Human Rights Prize was created to pay tribute to those who defend human rights (HRD).

In June, Twomey – the former Chief Justice - was appointed chairperson of a commission for the reform of legislation for minors.