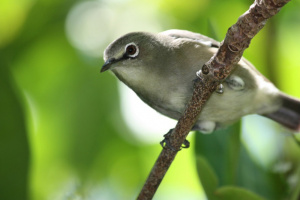 Henriette said that evidence has shown that population of some species notably the 'zwazo linet' (Seychelles white eye) has declined over the years. (Julie Gane)

The status of five endemic species that have been classified as endangered in Seychelles is stable, but conservationists want a more comprehensive study to better protect these species.

The next census is scheduled to take place next year coinciding with the breeding season for the species. The updated report is submitted to the ministry early in December.

“The census is part of the section’s efforts to protect Seychelles' biodiversity and to get updated information on the population and distribution of these species. The data collected guides the ministry’s actions and activities that will reduce the threats and increase the population of the species,” explained Ashley Pothin – conservation officer.

Pothin added that the annual census is conducted by expert consultants in the conservation field with knowledge in species monitoring and management. The census usually coincides with the breeding season of these species.

“Annual updates allow quick conservation and preservation measures if needed. The annual census also provides us with the possibility of establishing a trend in species population which ultimately will confirm if conservation programs in place are working,” said the conservation officer.

However, Pothin feels that a comprehensive study is needed to ensure more protection and conservation. Pothin explained that though the report covers species distribution, population status and recommendations on how to better manage the species population, a study would provide in-depth information about species.

Conservation biologist Elvina Henriette told SNA that a census is good but for her how the collected data is used is more important.

“For instance, how does the data translate to concrete information in terms of the species biology, their habits as well as breeding and feeding patterns. This should then be translated into concrete actions or work plans for further protection,” said Henriette.

Amongst the list is the Seychelles Swiflet classified as vulnerable by the International Union for Conservation of Nature (IUCN). The five species are threatened by loss of habitat and feeding areas, predators such as rats as well as human disturbance.

“Overall, the Biodiversity Conservation Section is fairly satisfied with the annual information gathered on the different species and there are still more to do to preserve our endangered species and their habitats,” said Pothin.

Pothin added that the country is developing very fast, “demands for infrastructures are increasing. We need to maintain that balance and aim always for sustainable development. The ministry will always stand firm on the protection of the endangered species as well as areas considered as territories for those species.”

On the other hand, Henriette warns that the ministry should be more proactive as she said that evidence has shown that population of some species notably the “zwazo linet” has declined over the years. “We once had a healthy population at Conception island but most of the birds were killed by rats introduced to the island possibly by poachers. Luckily before the population was destroyed, some of the birds were transferred to two other islands,” explained Henriette.

North Island and Fregate are two of the 115 islands of Seychelles in the western Indian Ocean -- where the birds were transferred in 2007. Two years ago, some of the birds were also brought to Grande Soeur island.