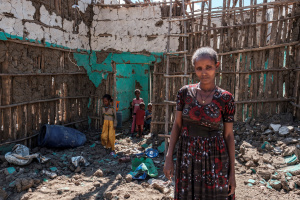 A woman stands with her children amidst the rubbles of her house that was damaged during the fightings that broke out in Ethiopia's Tigray region, in the village of Bisober, on December 9, 2020. The November 14 killings represent just one incident of civilian suffering in Bisober, a farming village home to roughly 2,000 people in southern Tigray. In retrospect, Bisober residents say, the first sign of the conflict came seven months ago, when members of the Tigray Special Forces took over the village elementary school, which had been emptied because of the coronavirus pandemic. (EDUARDO SOTERAS / AFP)

(AFP) - The European Union said Wednesday it is postponing nearly 90 million euros in budget support payments to Ethiopia because of the conflict in the northern Tigray region.

The funds would only be given if Ethiopia's government met the EU's conditions, which include granting humanitarian aid access to everyone in need across Tigray, European Commission spokeswoman Ana Pisonero-Hernandez told AFP.

The decision came as the UN children's agency UNICEF warned that 2.3 million children remain cut off from aid in Tigray, as food and other supplies dwindle.

Another EU condition for funding was that civilians be allowed to seek refuge in neighbouring countries, after reports some had been blocked trying to join the tens of thousands who have fled the fighting into Sudan.

Pisonero-Hernandez said the other conditions were the end of "ethnically targeted measures and hate speech", that mechanisms to monitor human rights violations be put into place, and all communication and media access be restored in the region.

Thousands have died in the fighting, according to the International Crisis Group think tank.

But the UN has since reported fighting in multiple parts of the region.

The UN has complained about limited access for humanitarian assistance, saying on Monday that "we have not been able to reach people that we know are in need".

On Tuesday UNICEF said protecting the children must be a priority.

"We are extremely concerned that the longer access to them is delayed, the worse their situation will become as supplies of food... and other essentials run low," it said in a statement.

Tigray was under a communications blackout for more than a month, though phone service has been partially restored and the government says life is returning to normal.

The EU's decision is intended to highlight its wish for a cessation of hostilities and "resolution through political means", according to an internal document seen by AFP.

The document, authenticated by two diplomatic officials in Addis Ababa Wednesday, also notes the EU's call for a "follow-up on allegations of human rights abuse" during the conflict.

"Postponing these disbursements does not imply that funds are lost for the government of Ethiopia," the document states.

The EU spokeswoman said that the decision "does not affect EU humanitarian programmes on the ground or other development actions."

Abiy's spokeswoman referred AFP's questions to the finance ministry, which did not have an immediate response.