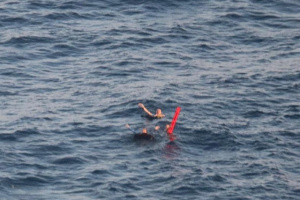 The five divers who had spent around six hours in the sea were found in the vicinity of the Mamelles island which lies around 14 kilometres northeast of Mahe, the main island. (Seychelles People's Defence Forces/Facebook)

(Seychelles News Agency) - Five foreign divers from the UK, South Africa and Russia who were rescued at sea in Seychelles on Sunday after six hours in the water have been released from hospital after a routine medical checkup, said a top official.

A rescue operation was launched after a report was filed with the Seychelles Coast Guard late Sunday afternoon that five divers had not been sighted at the location they were supposed to have resurfaced. Three of the divers were from the UK.

Captain Joachim Valmont, the chief executive of the Seychelles Maritime Safety Authority (SMSA), told SNA that local authorities had a debriefing with the divers on Monday morning to find out what happened.

“They told us that six of them left to go diving as part of their leisure activities. One stayed with the boat and the other five went diving. They said that within 20 minutes they found that there were strong currents and the water was not clear enough for them to see below so they resurfaced. When they got to the surface they could not find the boat that was supposed to be on standby,” said Valmont.

"The standby boat had drifted with the current but the person onboard waited for 45 minutes and when he did not see the divers return he called his representative who informed the Coast Guard. From then on a rescue operation was launched,” added Valmont.

The five divers who had spent around six hours in the sea were found in the vicinity of the Mamelles island which lies around 14 kilometres northeast of Mahe, the main island.

Valmont warned the divers that irrespective of what size the boat was, it was important that they informed the authority when they were going out to sea.

“If we had known we would not have used all our resources for the rescue operation. In the briefing we also informed them of the cost incurred. We are in a difficult economic situation with the COVID-19 pandemic and we don’t have a budget for such operation. They agreed to bear certain costs,” Valmont told SNA.

He took the opportunity to reiterate that irrespective of if you are going out in a small or big craft, "it is important to notify the authorities when you are going out to sea. Now it is very simple: if you are going on a day trip you don’t have to fill in a form you simply provide the information on the boat which direction you are heading and the number of people on board.”