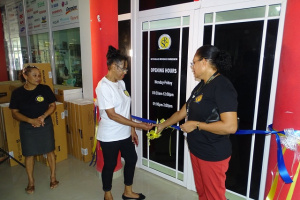 Herminie (1st right) at the opening of the office on Praslin. (Seychelles Nation/Facebook)

(Seychelles News Agency) - In its 2019 report launched last week, Seychelles' Auditor General revealed that $28 million in uncollected revenues due to the island nation's government is tax money. Some of the uncollected taxes date as far back as 2010.

SNA met up with the commissioner general of the Seychelles Revenue Commission, Veronique Herminie, to know more about the tax debt and what mechanisms are being put in place to ensure that the money is recouped.

Herminie started the interview by explaining the process by which a tax debt arises.

VH: Tax debts should not be categorised in the same way that a provider of a service or a supply, accounts for debtors. The Seychelles Revenue Commission (SRC) has as its main task to raise tax debt as part of its revenue collection process and this is a daily occurrence. The process for collection of taxes - which is enshrined in law - requires the issue of a tax assessment, be it business tax, VAT (value added tax), or any other taxes, and each tax has its timelines for lodgment of returns or payment of relevant taxes due. The law however also grants the taxpayer the right to object, appeal, go to court or pay by instalments the taxes owed thus delaying or prolonging settlement.

Currently, Seychelles has in place a self-assessment system which means that it is the taxpayers themselves making the declaration of their earnings or expenses and as a result how much tax is expected to be paid. These figures are only reviewed and adjusted by the Seychelles Revenue Commission (SRC) where it is felt that there is a potential for under declaration of income, excess claim of expenses or for other considerations as per the provisions of the legislation in place. These cases are thus referred to our audit team for review and the law allows for these reviews to cover prior years where it is felt there has been an avoidance of taxes.

SNA: How much taxes are in arrears?

VH: Without having sight of the Auditor General's final report for 2019, SRC cannot correlate the figures mentioned but at the time of the last review of revenue collection by the Auditor General's office which was as at August 31, 2020, the total tax debt stood at SCR 958,835,144.39 approximately $45 million and due to the procedure for objections or appeals only SCR400, 361,578.65 approximately $19 million can be collected.
This sum represents 7204 'tax debt cases' not necessarily the number of taxpayers. One taxpayer may owe taxes under several tax types and each is considered as one case.

As mentioned by the Auditor General, unfortunately, over SCR200 million approximately $9 million of these debts have indeed been in the SRC books for quite some years (before 2015) and these despite all recovery efforts. Some of the cases are either already with the Attorney General or being prepared for prosecution. Companies going through winding down or liquidation process will fall under the 51 write-off cases and for these SRC can only collect what is available following the liquidation procedure.

It should also be mentioned that 43 per cent of the total debts owed are related to the accumulation of penalties and additional taxes for late lodgment, late payment or culpability penalty for under declaration of income. An interest component is also provided for under the law for late payment, which can be quite excessive, and no waiver is permissible under the laws for interest. Arrears collected for the past three years as part of Revenue Collection amounted to SCR 835,805,462.07 approximately $39 million.

SNA: What are the challenges preventing the SRC from collecting taxes due on time?

VH: The main challenges causing a delay in the collection of tax debts are taxpayers have the right to be heard under the tax laws, with 18,452 taxpayers, more than 7,300 cases in arrears of taxes enforcement of compliance for payment is a challenge with around 90 staff including processing officers, auditors, registration officers, enforcement officers, legal officers and objection officers. An ageing Client Management Systems (CMS) causes delays of reconciliation of accounts for the issue of Statement of Arrears, lack of a case management system within the CMS to efficiently monitor and follow-up on the arrears cases and this is done manually, a large number of taxpayers have multiple returns outstanding across tax types.

A new tax is introduced but labour force remains the same, un-cooperative taxpayers and taxpayers with other legal issues and court cases impeding on the possibility for SRC to further its case for prosecution and lack of understanding of tax laws by the parties involved.

SNA: What mechanisms are being put in place to collect these dues or tackle other non-compliance issues?
VH: Our standard operating procedure for enforcement of tax debts is presently under review to tighten the net with regards to debt collection. As soon as an assessment is issued it should be picked up by an Enforcement Officer for follow-up on settlement and timeline for payment of these new debts are now rather stringent - within seven days.

Old debts on account for which the taxpayer is not showing sufficient interest in the settlement will be pursued through the courts. Twenty-two such cases are already with the prosecution team with 17 filed in Court and submissions are being prepared for another three cases to be forwarded to the Attorney General's Office before the year-end. Twenty more have been identified for prosecution next year should they not make the necessary efforts to resolve their tax issues. We also placed restrictions on properties and assets owned by taxpayers in debt – eight cases and enforcement of Court judgements are in progress for two cases.

SRC is presently making use of all available avenues as provided for under the Laws to ensure that it collects the maximum amount of taxes owed.

SNA: In what category is the most money outstanding?
VH: Business tax has the largest number of cases as at August 2020 with arrears at SCR 528.7 million representing 55% of total tax debts outstanding. VAT audit and VAT default assessments in arrears run second at SCR 202 million.

SNA: What are other issues impacting on revenue collection?
VH: In addition to non-lodgment and non-payment of taxes, local businesses are slowly starting to make use of tax planning mechanisms including the splitting of tax income to fall under existing thresholds (especially for VAT); and transfer pricing methods to erode their tax base. There is also the issue of cash-intensive businesses under-declaring income and not maintaining appropriate records.

The enabling environment for a business owner to create a tax debt and be still permitted to register a new licensed entity for the same business activity whilst the tax debt remains unsettled, is becoming an issue for SRC. It is also unfortunate that we have some of our Tax Agents embracing certain unsavoury practices rendering our work more difficult, an issue being tackled with the assistance of the Tax & Customs Agent Board (TACAB).

Businesses operating under an unlicensed regime or as we say the "informal sector" is not necessarily exempted from paying taxes. The minute a person or entity engages in a commercial activity, business or a trade, they should register for Tax purposes. It is encouraging to see the engagement of politicians in promoting a policy whereby all who are undertaking a business activity should contribute towards some form of taxes. Policy reviews to that effect will be brought to stakeholders soon.

SNA: How important is tax contribution to the economy?
VH: Despite all the challenges, the revenue collected by SRC over the past three years have been rather consistent making a positive contribution towards Seychelles' economy and to the GDP. Even this year being the most difficult one for SRC and for Seychelles, we have been able to maintain our collection more or less at par with the budgeted figures SCR 5.39 billion as of the end of November 2020. For the past three years, SCR 21 billion approximately $990 million were collected.

SRC encourages all taxpayers to meet their tax obligations as provided for under the Revenue laws be it for domestic tax or Customs. There will be no more leniency for either non-lodgment, under declaration of income or non-payment of taxes. The relevant structures and mechanisms are being put in place to ensure that the provisions of the Tax laws will be applied more strictly for those who are repeated offenders.

Editor's Note: This interview has been edited for brevity.