Seychelles to ban balloons in another step to protect beaches, ocean from litter 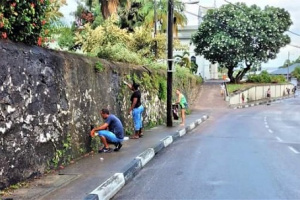 Saturday's clean-up exercise was the second biggest this year, following the nationwide Clean Up the World campaign in September. (Patsy Athanase)

(Seychelles News Agency) - Seychelles plans to ban the importation and sale of balloons as part of ongoing measures to protect the environment, President Wavel Ramkalawan announced on Saturday.

The president appealed to the population to adopt a more environment-friendly approach in their everyday activities and announced that as part of ongoing efforts to keep Seychelles clean, the government will soon impose a ban on the importation of balloons.

No timeframe for the ban was announced.

"We have noticed that balloons are being used more frequently at the beach. These are left behind and are washed away during high tides, and end up in the oceans, where they have a destructive impact on marine life," said Ramkalawan at the launching of a clean-up exercise in the capital Victoria on Saturday, an initiative of the Mayor's Office.

Seychelles, an archipelago in the western Indian Ocean, imposed a ban on plastic bags and other plastic utensils including cups, forks, Styrofoam takeaway boxes and plates in 2017 to protect its environment. This was followed by a ban on single-use plastic straws.

Ramkalawan's announcement was welcomed by the principal secretary for environment, Alain Decommarmond, who said there have been several discussions on the matter as more and more people are using balloons at the beach and failing to clean up the place afterwards.

"This is good news for the environment and those ensuring its upkeep. It is encouraging to see that more is being done to protect our environment and this is also a continuation of measures so far to eventually ban the use of all forms of plastics in the country," said Decommarmond.

Saturday's clean-up exercise was the second biggest this year, following the nationwide Clean Up the World campaign in September.

The Mayor's office had invited inhabitants from the eight districts which form part of Victoria as well as businesses and organisations operating in the capital to lend a hand to clean the city.

Decommarmond said keeping Victoria clean remains a challenge especially with on the outskirts of the capital where there are private dwellings and businesses.

"Contracts are awarded to clean the public places in Victoria, however, private spaces for residential and commercial use which are the owners' responsibility are sometimes not taken care of," he explained.

He added that such an initiative will hopefully entice everyone to play their part in keeping the capital and its surroundings clean.

The new Minister for Environment, Flavien Joubert, thanked the Mayor's office for the initiative and announced that a similar exercise will soon take place at community level.

"As we approach the festive season, my ministry is inviting people to clean their districts and communities. To facilitate this, we will be opening the landfill in Providence to the public from December 18 to 20, to allow them to dump their rubbish," said Joubert.

Speaking to the media following the activity, the Mayor of Victoria, David Andre said he hopes that through this exercise they can bring back the concept of volunteering and that this will be an annual event.


Tags: Clean Up the World, Mayor of Victoria