Nigeria gets back 'priceless' smuggled antique from Netherlands 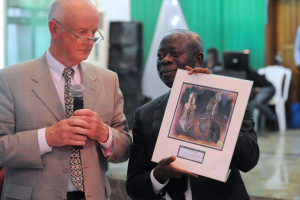 Edo State Governor Adams Oshiomhole (R) holds a catalogue of the Benin bronze artefacts returned by retired hospital consultant Mark Walker, during a ceremony in Benin City, Nigeria, on June 20, 2014, after he returned two Benin bronze artefacts stolen by his grandfather during a British raid in 1887. Two statues from among thousands of works of art looted by British soldiers in the 19th century have been returned to Nigeria, prompting calls for other "stolen" treasures to be repatriated. For more than a century, the artefacts from the "Benin Bronzes" collection had been in the family of retired medical consultant Mark Walker, whose grandfather was involved in a 1897 British raid in which they were taken. (AFP PHOTO / PIUS UTOMI EKPEI)

(AFP) - Nigeria has received a "priceless" terracotta head believed to be at least 600 years old which was smuggled to the Netherlands, the information minister said.

It was taken from southwestern city of Ile-Ife and smuggled through Ghana.

Dutch ambassador to Nigeria Harry Van Dijk on Thursday returned it to Information Minister Lai Mohammed in a ceremony in the Nigerian capital Abuja.

"The smuggler had obtained forged documents" to take it out of the country, Mohammed was quoted as saying in a statement.

Dutch customs intercepted it at Amsterdam airport and "alerted the.. Information and Heritage Inspectorate of the Netherlands to give an opinion," the statement said.

Dutch officials then contacted their Nigerian counterparts, leading to the return of the "priceless and timeless" artefact, Mohammed said.

Hundreds of Nigerian artefacts, including Benin bronzes stolen during pre-colonial and colonial period, are in museums in Europe and the United States.

Mohammed said Nigeria would continue to seek their return.