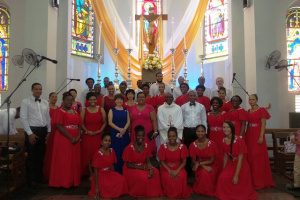 (Seychelles News Agency) - Trying something new can sometimes produce extraordinary results, and this is exactly what happened this year when the Seychelles National Choir took part in its first ever online competition.

The choir won first prize in the adult mixed voice category of the 15th edition of the China International Chorus Festival.

The bi-annual festival founded in 1992 brings together choirs from China and abroad to sing. It is the largest-scale and highest-level international chorus festival in China.

The 15th China International Chorus Festival took place from September 28 to October 31 in Beijing with a total of 13 categories of choirs of different age groups and genders.

The choir manager, Xiaoju Lownam, told SNA that "we were supposed to go there for the competition but because of COVID-19, we couldn't travel, which was a pity, but we did it online which was a new thing."

The Seychelles National Choir is a voluntary performing art troupe of 33 active members. The choir was established in 1999 under the direction of Lownam, who at the time was the principal voice instructor of the then National College of the Arts.

The choir has participated in a number of events both locally and internationally. It had the chance to perform for foreign dignitaries such as the Mauritian Prime Minister during his official visit to Seychelles, an archipelago in the western Indian Ocean. It also performed during the visit of the president of Cape Verde.

Lownam, who is also the conductor and singing instructor of the choir, said that the most challenging part of participating in an online competition is that the choir didn't have any idea who they were competing against.

"If it is a live competition, you go face to face and get to hear others performing, and hence have an idea of your level. The challenging thing about participating in such an online competition, where you just send your videos, is that you do not even know if your level will meet the criteria set. You just prepare your pieces and send them," she explained.

"The competition was of high level, which really tested our abilities. Our pieces had to meet a certain voice range. We have been training all year for the competition. I think that it is the level of dedication and the amount of training that has allowed us to win in our category," she added.

Despite constraints such as a lack of musicians to play with the singers or financial support, Lownam is confident that she and her team can achieve so much more. She is calling on the youth to join the choir as this is an activity that not only develops the voice but brings a lot of health benefits.