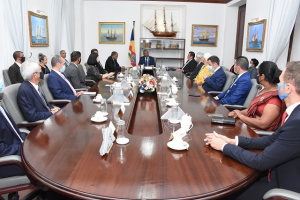 President Wavel Ramkalawan on Thursday met with the diplomatic corps with a presence in the island nation. (Jude Morel)

(Seychelles News Agency) - Climate change, the environment and the fight against organised crimes remain top priorities for bilateral cooperation between Seychelles and other countries.

In order to ensure a smooth continuation of diplomatic relations, President Wavel Ramkalawan on Thursday met with the diplomatic corps with a presence in the island nation.

The meeting at State House in Victoria saw the attendance of the resident ambassadors, high commissioners, charge d'affaires and representatives of the Seychelles' Department of Foreign Affairs. Also present were Seychelles' vice-president, Ahmed Afif, and the Minister for Foreign Affairs and Tourism, Sylvestre Radegonde.

In his opening statement, Ramkalawan said that "the government that I have the honour to lead, remains committed to furthering and deepening relations with the countries represented here today, as indeed with the wider international community."

"My government remains similarly keen to explore all avenues of cooperation with friends and partners for our mutual benefits. We need to continue working together on common challenges such as those relating to climate change, the environment, the fight against organised crimes including drugs, arms, terrorism and human trafficking, to name but a few," he said.

"Practical support to Seychelles in dealing with maritime threats, including blue crimes, which will effectively boost our maritime security through capacity building of our law enforcement agencies, remain vital and we hope that these are further enhanced," added Ramkalawan.

The members of the diplomatic corps based in Seychelles are from Cuba, China, Sovereign Military Order of Malta, India, the United Kingdom, France, Libya, Japan, Sri Lanka, Russia and the United Arab Emirates. Bilateral relationships have been established with some of these countries as early as in 1976, when Seychelles, an archipelago in the western Indian Ocean, became independent.

After the meeting, the foreign affairs minister told reporters that the members of the diplomatic corps appreciated the chance to meet with the president.

"When you are an ambassador or you are involved in diplomacy, you might hear rumours, but when, like the English saying goes, you get it from the horse's mouth, it is good. Seychellois ambassadors had the opportunity to meet with the head of state which is not always the case in big countries. Everyone welcomed this move and the president has reassured them that relations will continue," said Radegonde.

The president this week announced the closing of three of Seychelles' embassies -- in Sri Lanka, Cuba and Geneva -- to reduce expenses. Radegonde said that "when looking at which embassy to close, we looked at where there wouldn't be many negative impacts."

Radegonde said that the respective ambassadors have been made aware of the reasons why and as the president explained this had nothing to do with Seychelles' bilateral relations with those countries.

"We would have liked to maintain all of our embassies around the world but due to our financial situation, the decision to close these three embassies had to be taken. We need to prioritise and keep the little money that we have for local expenses. They welcomed the news really well, especially the ambassadors where we are closing our embassies," he added.

Radegonde said that virtual meetings will be held with members of the diplomatic corps not present in the country at a later date.