Over 50,000 corals raised in nurseries after 10 years of work by Nature Seychelles 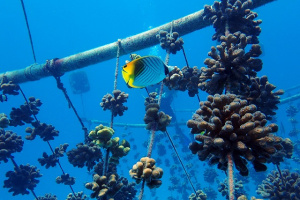 The Reef Rescuers project was developed as a trial restoration project on the fringing coral reef within Cousin Island Special Reserve. (Nature Seychelles)

(Seychelles News Agency) - After 10 years of coral restoration, Nature Seychelles has raised over 50,000 corals in its underwater nurseries.

New corals have been planted on more than 5,000 square metres of degraded reef within the marine reserve of Cousin Island Special Reserve.

The chief executive of Nature Seychelles, Nirmal Shah, said it was "extremely challenging at the beginning, this being the first wide-scale project of its kind in the world."

He said that there was a lack of local capacity specifically for reef restoration and some equipment required for the project couldn't be sourced locally, a costly and time-consuming endeavour.

In recent decades, global warming has had very significant detrimental impacts on coral reefs due to rising sea temperatures. This has left coral colonies bleached and subsequently vulnerable to a range of diseases and death.

Following the 1998 El Nino event in the Indian Ocean, an average of 90 percent of live coral in Seychelles died. A further 50 percent loss was recorded in 2016 and surveys carried out nearly a decade later found it was unlikely for corals to recover on their own.

As a form of intervention, the Reef Rescuers project was developed as a trial restoration project on the fringing coral reef within Cousin Island Special Reserve managed by Nature Seychelles.

The organisation started the reef restoration project as a mean to combat climate change induced coral bleaching in Seychelles, an archipelago in the western Indian Ocean. The project began in 2010 with a grant from the United States Agency for International Development (USAID).

At the moment the long-term success of the project is currently being assessed, with initial data demonstrating an increase in both coral recruit and fish densities following intervention, highlighting the benefits of active reef restoration.

Following the 10 years of success, Nature Seychelles recently received a new grant from the adaptation fund through the United Nations Development Programme (UNDP) and the government of Seychelles.

"As part of a large regional project with Mauritius, the NGO is set to leapfrog into the third and next level of its coral reef restoration program. This new project will look at novel techniques from overseas in coral genetics and reproduction," said Shah.

The project is expected to be launched by the end of this month.