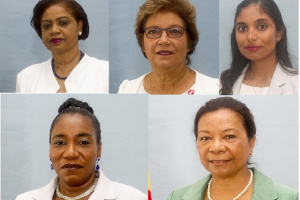 (Seychelles News Agency) - A leadership programme in politics tailored specifically for women in Seychelles could be a way to boost the role of women in political leadership positions in the island nation, political and civil experts said following a national election that saw mostly men fill the seats of power.

Women hold barely a quarter of the positions in the president's Cabinet and the National Assembly combined following the October vote.

"Women are there and very active in politics in Seychelles. However, they need to have self-confidence and be self-motivated to get in and assume leadership positions," Simone Decomarmond told SNA on Wednesday.

Decomamond, a former minister, sits on the Executive Council of the ruling party. "The long-term solution might be a proper programme tailor suited for women. One in leadership and politics. I am sure that The Guy Morel Institute here can come up with such a programme," said the ex-minister. Decomarmond added that such programme should get the full support of political leaders.

Marie Nella Azemia from the civil society platform CEPS said that in comparison to elections held in the past 10 years, this year's elections have brought the percentage of women appointed as ministers and elected as parliamentarians to a lower level.

"It was observed that no political party fielded female candidates for the elections as presidential and vice-presidential candidates at all," added Azemia, who in the past has also served as Clerk to the National Assembly.

According to Azemia "there were also insufficient female candidates for the parliamentary election in view that none of the parties came up with an agenda for pushing forward women. There wasn't any solid preparation and specific programme for women to be politically empowered in order to stand as candidates or fill important decision-making positions thereafter."

In 2018, the island nation was ranked amongst the top 10 gender parity governments in the world when five women and five men were appointed as ministers.

Prior to that in 2015, Seychelles – 115 islands in the western Indian Ocean - received the 'Gender Parity Achievements' award from the African Union Summit.

This was after the islands were ranked first in Africa for the Gender sub-category in the 2014 Ibrahim Index of African Governance, which rated 52 African countries on eight different indicators including gender equality, gender balance in education, Women's Participation in the Labour Force, women in parliament among others.

Ben Vel, member of local Gender Association - GEM Plus - who over 20 years has been involved in training and sessions empowering women said that social conditions of women might be the main hindrance to women opting for leadership roles in politics. "Most of our household are female-headed and maybe their responsibilities as mothers prevent them from taking such positions," said Vel.

Vel has welcomed the suggestion of a leadership programme and said that such was much awaited. Vel added that it is crucial that such programme is one where women can also be nurtured to become leaders.

"The issue is women should change their mindsets. They should realize that by becoming political leaders will not only result in bettering their own lives but also bettering the lives of others as well," explained Vel.

Daniella Marie told SNA that she thinks that women refrains from joining politics because of the lack of political maturity in Seychelles. "Just look at social media lately and the number of insults being thrown just because of politics. Even now more than a week after elections. We seriously need education on this issue."

Education is also something that the ex-minister said political parties should take up. Decomarmond added that in her party the issue of quota system in politics being pushed by the Southern African Development Community (SADC) was also talked about. "We should seriously work toward this now that we have five years to go before the next elections."

Decomarmond stressed that with all this, women will not succeed if women themselves do not support each other and push for women leaders in the political sphere.