Seychelles' National Assembly, controlled by the president's party, is sworn in 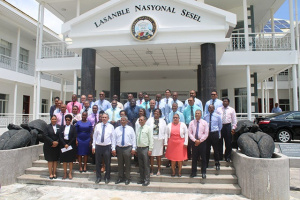 (Seychelles News Agency) - The 35 members of the seventh National Assembly of Seychelles -- a majority of them from the Linyon Demokratik Seselwa (LDS) party -- were sworn in on Wednesday.

The 26 members voted into office in legislative elections held October 22-24 and the nine members chosen for the proportionate seats took their oath of allegiance.

LDS, whose presidential candidate, Wavel Ramkalawan, won the election with 54.9 percent of the valid votes, has 25 members in the National Assembly. United Seychelles, now in the opposition, has 10 members.

The seventh National Assembly of Seychelles, an archipelago in the western Indian Ocean, chose Roger Mancienne, the LDS party leader, as the new Speaker.

Mancienne, who has joined the Assembly as a proportional member, told the press that this is a big moment for him.

"It was a step that I was not expecting to take in my life, but I acknowledge the responsibility and it is a big honour. The office of the speaker is very important as it is in charge of a branch of the government," he said.

The Seychelles' Constitution of 1993 following the reintroduction of multiparty democracy provides for the separation of powers between three branches. The President heads the executive, the Speaker of the National Assembly heads the legislature and the Chief Justice heads the judiciary.

Mancienne said that he was happy "that the democratic exercise that we have conducted with the people of Seychelles has given me the opportunity to fill this post."

He added that he is in the National Assembly to support and scrutinise the government's programme and legislation.

The newly elected member of the eastern district of Cascade, Philip Monthy, said that it is a privilege to join the assembly and to deliver on the promises that he has made to his constituents.

"As a new member, I have first to understand the work of the National Assembly. But I am giving the people the assurance that whenever there is something to do with their aspiration, I will defend and push it forward," said Monthy.

Rocky Uranie, the elected member of United Seychelles for the Inner Islands, said that "as an opposition with minority seats in the Assembly our work will not be easy."

"However, now that we are in the opposition, it will be easier for us to criticise, put our points forward, and scrutinise the government. We are ready to keep this team together," said Uranie.

The first task of the seventh National Assembly is to approve a proposed 13-member Cabinet of Ministers.