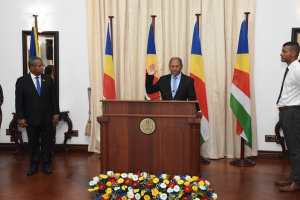 Afif said he will discharge his responsibility without favour and in a way that every Seychellois is treated the same as we are all children of Seychelles. (Jude Morel)

(Seychelles News Agency) - Ahmed Afif was sworn in as the Vice President of Seychelles on Tuesday at State House in the capital, Victoria.

Afif ran alongside Wavel Ramkalawan, who won the presidential election with 54.9 percent of the valid votes.

In his address, Afif said, "I will discharge my responsibility without favour and in a way that we treat every Seychellois the same as we are all children of Seychelles."

"The task that I have taken will be a difficult one, not only because of COVID-19, but it is because there is a lot to transform in this society. Today the country needs a lot of direction and a lot of leadership. I am confident that the president elect, Wavel Ramkalawan, will provide the direction needed for Seychelles to surpass this period of economic difficulties," he said.

The new Vice President said that his role would be to assist President Ramkalawan to implement his reform and vision "to govern Seychelles during the next five years, where he will help advise and prepare an action plan of reforms in line with the thinking of the new government."

Afif, who completed his Bachelor of Science in Maths, operational research, statistics and economics in 1992, has occupied several posts in the government of Seychelles, an archipelago in the western Indian Ocean.

He served as chief executive of the Seychelles International Business Authority (SIBA) and then later as Principal Secretary for Finance and Trade between 2007 and 2012.

Afif was instrumental in helping the government design and implement a major macro-economic reform involving major fiscal and monetary reforms in 2008.

After he left the government, Afif joined Lalyans Seselwa formed in 2015 and became the running mate of party leader, Patrick Pillay in the presidential election that year. He was elected as a Member of the National Assembly for the northern district of Anse Etoile in 2016 when his party joined the Linyon Demokratik Seselwa (LDS) coalition to contest the legislative elections.

His party LDS won 20 out of the 26 districts in the National Assembly election October 22-24, with the remaining six going to United Seychelles. This is five seats more than the party won in the last election in September 2016.