President Wavel Ramkalawan sworn in after sea-change election for Seychelles 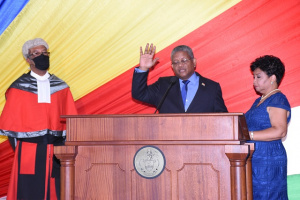 He was sworn in at 5.20 p.m. local time, putting an opposition leader in the top seat of power for the first time in 43 years. (Joena Meme)

(Seychelles News Agency) - Seychelles' newly elected leader, Wavel Ramkawalan, was sworn in as the country's fifth president in a ceremony at State House in the country's capital on Monday.

Ramkalawan, whose party, Linyon Demokratik Seselwa (LDS), won a landslide victory in the October 22-24  presidential and legislative elections, won the presidency with 54.9 percent of the valid votes. He took the oath of Allegiance and Presidential Oath in front of his family, party members, outgoing President Danny Faure and other dignitaries.

He was sworn in at 5.20 p.m. local time, putting an opposition leader in the top seat of power for the first time in 43 years. Vice President-elect Ahmed Afif will be sworn in on Tuesday at 10 a.m. at State House.

Ramkalawan's victory and that of his party in the National Assembly represents a sea change in political power for the island nation, with the former opposition now in full control of the government of Seychelles. But in his inaugural speech, Ramkalawan called for national unity, where everyone is equal, and no one is left behind.

"Yesterday we were LDS, United Seychelles and One Seychelles supporters. Today I call on each one of you to refer to each other as Seychellois, because this is who we are, and this is what unites us," he said.

The newly-elected president also reiterated his call for a drug-free Seychelles -- a scourge which he said has destroyed the youths and their families.

"Today I make a personal commitment that my government will spearhead a strong anti-drug campaign to eliminate drugs in our country and I appeal to all drug traffickers to stop destroying our country and our youths," said Ramkalawan.

Ramkalawan also praised the outgoing president for his approach during this transition period, as he cedes power after serving as president for four years. He also thanked the people of Seychelles for maintaining calm and peace at this historic time.

"This transition is being done in a peaceful manner and Seychelles is an example to many countries, showing how this process can be done in peace, in a democratic way," said Ramkalawan.

"Let's do away with vengeance, hatred, and anger and remember that we are one nation, one where there is no discrimination regardless of the colour of your skin, race, religious beliefs. We are all Seychellois and we all have a place in our country which is Seychelles, where we can all make a valuable contribution," he added.

The outgoing President Danny Faure won 28,178 votes or 43.5 percent. This is his party's first defeat at the top office since 1977 when it came to power through a coup d'etat. It has dominated the island's political landscape for the past 43 years.