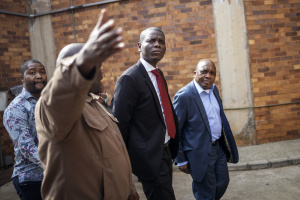 The 64-year-old minister is the fifth member of the government to contract the virus after his colleagues in the ministries of defence, labour, trade and mineral resources.

"I wish to inform the public that this afternoon my wife, Dr May Mkhize, and I have tested positive for Covid-19," said Mkhize is a statement late Sunday.

The hands-on minister, who has been constantly on the move across the virus-ravaged country since the start of the pandemic, said he had taken the Covid-19 test after feeling "abnormally exhausted" and losing his appetite.

He is now self-isolating at his home and has urged the few individuals who have been in close contact with him over the past week to quarantine and get tested.

He was confident that he and his wife would fully recover from the virus.

In a statement on Monday, President Cyril Ramaphosa wished the Mkhizes a "speedy" recovery as he called on South Africans to remain careful and "avoid a second wave of the pandemic".

By Sunday night the numbers of infected had climbed to 703,793 including 18,471 fatalities.

South Africa accounts for around 43 percent of the continent's detected cases.

Strict lockdown rules and travel restrictions imposed in March have since been eased.