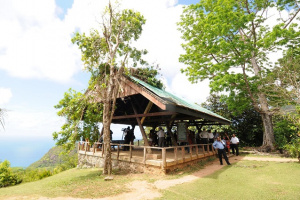 The site which is open daily from 9 a.m. to 5 p.m. is not only a tourism attraction but used by the local community for prayers and meditation. (Patrick Joubert)

(Seychelles News Agency) - The Seychelles Heritage Foundation has introduced entrance fees and other charges for commercial activities taking place at Venn's Town in order to collect funds to better maintain the historical site.

The Mission Ruins of Venn's Town -- named after a church missionary Henry Vence, who set up the commune -- is located in the hills of the main island, Mahe, southwest of the Morne Seychellois national park. It is a place of unique historical, cultural, aesthetic and ecological value.

Non-residents 12 and older have to pay $5.50 (SCR100) to access the site since October 15. Seychellois and foreign residents can enjoy the site for free.

The chief executive of the foundation, Benjamine Rose, told SNA on Friday that "the entrance fee is not an exorbitant price to pay."

"We had planned since early 2019 to introduce an entrance fee in 2020 at the Mission Lodge, principally to ensure that we have continuous maintenance of Venn's Town, which is an isolated site. The tickets are on sale from 9.30 a.m. to 4 p.m. at the site. It can also be bought at the National History Museum," said Rose.

The site which is open daily from 9 a.m. to 5 p.m. is not only a tourism attraction but used by the local community for prayers and meditation. For visitors, the mission lodge is a popular spot for photos or for a peaceful moment with nature.

The area is also used for important ceremonies such as weddings and the Foundation has introduced a half-day and full-day price for commercial photography and videography sessions as well as for wedding ceremonies. The prices differ for local and foreign photographers and videographers, ranging from $16.50 (SCR300) for a three-hour photo session conducted by a local to $110 (SCR2,000) for a six-hour video session for an international crew.

A wedding ceremony at the location for half-day for up to three hours costs of $55 (SCR1,000). Each additional hour will cost $27.50 (SCR500). The entrance and commercial activity fees also apply for the Domaine de Val des Pres, located in the eastern Mahe district of at Au Cap.

Talking about the difference in prices for locals and foreigners, Rose said that "we need to think about the environment in which this business is being done as most of the time the prices are established based on the local market."

"Most of the time, foreign photographers are doing shoots for famous magazines or brands, hence the price that they are charging their clients is much higher," said Rose.

She added that photos that are for personal use will not be charged.

"We know that people need to have souvenirs when they visit a place and the more they have these souvenirs the happier we are because they post these photos or send them to friends which becomes a form of promotion for us. When someone comes to the site with the purpose of doing business, I think it is just fair that we get a share of the profit," explained Rose.

Venn's Town settlement was set up in 1875 and was the beginning of a new era for people who had been captured and oppressed. The freed Africans had a great impact on Seychelles in the formation of the Creole Seychellois identity and it gave birth to subsequent civilisation.

The ruins consist mainly of traces of foundations of five buildings covering a total area of 540 square metres. Some of the wall elevators are still in place together with the window recess but the most surprising foundations are those that some people call "the laundry" or "dormitory". These are 19 cavities of very small dimensions where some equipped with a metallic pipe for emptying the water.

The site also has a cemetery which was an extension to the original settlement where the liberated slave's children were buried.

The foundation is expected to complete works on a 'photo frame' and yoga corner at Venn's Town in by next week. This is part of the foundation's plans to have more facilities on the grounds of the site, which will attract more visitors.