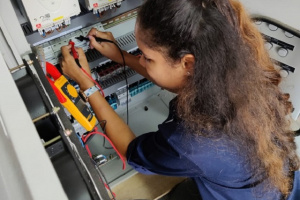 Through a scholarship funded by both the government and her employer, Charlette opted to further her studies in control and instrumentation engineering, a branch in electrical engineering (Linne Betsy, PUC)

(Seychelles News Agency) - Shanna Charlette is the first Seychellois woman to join the Public Utilities Corporation as an electrical engineer.

The 24-year-old rejoined the company after completing an electrical engineering course at the University of Hull in the United Kingdom, where she earned a first-class with honours for her master’s degree programme.

Charlette first joined PUC after completing her A-levels in 2015 as a hydrology technician. Her one-year tenure involved data collection, recording hydrological data and writing monthly reports. Through a scholarship funded by both the government and her employer, Charlette opted to further her studies in control and instrumentation engineering, a branch in electrical engineering.

“I was always intrigued by electronics and fixing things. I remember once I learned in secondary school how to change a plug and I thought it was so cool. The same night I bought a 3-pin plug and replaced it with a 2-pin plug. It worked and I remember that it made me so happy and I felt proud,” explained Charlette.

Charlette added that her days at the university were not always easy, especially in a male-dominated field. “I have many proud moments. I am immensely proud to have been the only female on my course and to have managed to excel. I have worked so hard for it and did not stop even though I felt like I could not do it.”

Despite being in a male-dominated environment and being faced with gender discrimination at times, Charlette said she remained focused and determined on her studies, and proving herself to her counterparts.

“It is quite intimidating because I was the only female on my course. The males are always testing you to see if you can do it. It's what I love to do and I put my mind to it so in the end proved them wrong. A lot of people asked me why I chose this field and my answer is always the same: you can achieve anything if you put your mind to it. The first key to success is confidence and determination”.

Two weeks since she started working, Charlette has been on rotation in different departments of the company but said that she is looking forward to joining the generation team at the main power station, where she hopes to remain for some time and develop further.

The chief executive of PUC has welcomed Charlette in her new post where he said women occupy important and crucial posts at PUC. Philippe Morin told SNA that Charlette joins other women engineers currently employed in water division and as civil engineers at the company. Morin added that the fact that PUC partly funded Charlette's scholarship shows its commitment.

Nadia Bouchereau, a career guidance counsellor, said that as early as 12 years, students are given guidance and about further studies and they are always encouraged not to let societal norms and stereotyping to influence their professional development.

“More and more we see many girls taking careers or even studying in fields which is male-dominated. I think this is the way forward and at school, we always encourage girls to make such choices," Bouchereau told SNA.