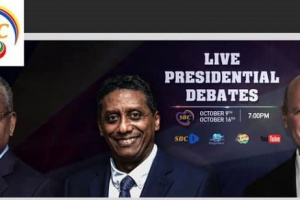 The debate will be broadcast live on SBC television channel 1, Paradise FM and Radyo Sesel radio stations and SBC YouTube from 7 to 8:30 p.m. (Seychelles Broadcasting Corporation/Facebook)

(Seychelles News Agency) - The three presidential candidates running in the island nation's October election will participate in a first-ever televised debate on Friday on three of the Seychelles Broadcasting Corporation's platforms, said a top official.

Wavel Ramkalawan of the main opposition group Linyon Demokratik Seselwa, the incumbent President Danny Faure of United Seychelles and Alain St Ange from the newest party, One Seychelles, will take part in the debate which will be broadcast live on SBC television channel 1, Paradise FM and Radyo Sesel radio stations and SBC YouTube from 7 to 8:30 p.m.

The chief executive of SBC, Bérard Duprès, told SNA on Thursday that a Canadian format has been adopted for the debate, which will include eight themes.

"Under each theme, there will be one question asked. Each candidate will have one minute to respond to the question. After each candidate has responded, the candidates will then enter into a debate with each other," said Duprès.

The debate will be for 4 minutes and will be overseen by a moderator, Bernadin Renaud and journalist Patsy Athanase. The second debate will take place the following Friday, October 16.

He said that "there will be an audience for all the debates. Attendees will be by invitation only. In view of the limitation in space at the venue and due to COVID-19 physical distancing measures, the number of attendees will be limited to 20 persons."

Each candidate will have 1 minute for their opening remarks and this will include a first general question.

"For example, why do you think you are the best candidate to be President? Order of opening remarks will be according to a draw done in advance with the candidates' representatives," added Duprès.

Questions to be put to the candidates are from the public who responded to a call for questions, underscoring the involvement of the electorate in this democratic exercise.

Helene Hoareau, a voter from the northern Mahe district of Beau Vallon, said that the presidential debate is a good initiative that will help voters make an informed decision on who to vote for.

"I hope this presidential debate does not give the candidates an easy ride. The questions should be challenging enough so we can choose the one with the right answers to solve the different issues that we are currently facing," said Hoareau.

Anthony Boniface of Les Mamelles, a central Mahe district said that he is expecting questions that will touch people from all walks of life.

"This debate must be a serious one. It will be a time where the candidates will present their ideas which will be translated to votes. The candidates should exchange views in a professional manner," said Boniface.

He added that "they should treat the different topics in an educational way and should avoid using rhetoric and insults on each other as seen in presidential debates elsewhere."

Three political parties -- Linyon Demokratik Seselwa (LDS), United Seychelles (US) and One Seychelles -- are contesting the presidential elections. For the National Assembly, LDS and US have candidates in all 26 districts while One Seychelles has 18 and Lalyans Seselwa three.

Around 70,000 people are eligible to vote in the presidential and legislative elections which will be held simultaneously in Seychelles, an archipelago in the western Indian Ocean, October 22-24.