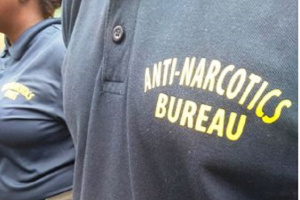 Five of the suspects were arrested on July 29 by officers of the Anti-Narcotics Bureau.(Seychelles Nation)

(Seychelles News Agency) - The Seychelles' Anti-Narcotics Bureau (ANB) said it is disappointed at the 8.5-year sentence given to Percy Charles Samson, who was arrested in the island nation's biggest seizure of herbal cannabis earlier this year.

ANB said on Thursday that Samson, 52, arrested on July 31, pleaded guilty to two counts: conspiracy to commit the offence of trafficking in a controlled drug and trafficking of a controlled drug. He faced a maximum sentence of life imprisonment after the seizure of 180 kg of herbal cannabis.

He was sentenced to a term of 8.5 years for each count; the sentences will run concurrently and the time spent on remand will be deducted from his sentence.

Six other Seychellois males in the case were all charged before the Supreme Court on the August 28 of several drug-related offences and they have all been on remand since their arrest by ANB officers in July.

Five of the suspects were arrested on July 29 by officers of the Anti-Narcotics Bureau (ANB) on a sailing yacht within the Seychelles Exclusive Economic Zone during a joint coordinated marine operation which had the participation of the National Information Sharing and Coordination Centre (NISCC), Seychelles Air Force and Seychelles Coast Guard.

Seychelles, a group of 115 islands in the western Indian Ocean, has a zero-tolerance policy towards trafficking and importation of illegal drugs. If found guilty, the maximum sentence is life imprisonment.