Int'l 'consensus' that C.Africa vote must be held in Dec: UN official 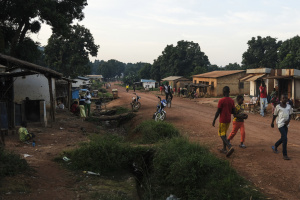 A general view of a street in Bocaranga, Central African Republic, on September 23, 2020. Since MINUSCA (United Nations Multidimensional Integrated Stabilization Mission in the Central African Republic) chased the 3R armed group from its bases in June, the militia roam the bush, attacking civilians and soldiers. Many civilians are too afraid to leave the town. (Camille Laffont / AFP)

(AFP) - The international community supports the staging of elections in the war-wracked Central African Republic as planned in late December, the UN under secretary-general for peacekeeping, Jean-Pierre Lacroix, told AFP Thursday.

Presidential and legislative elections in the country -- one of the world's poorest and most violent, where militia groups control two-thirds of the territory -- are set for December 27.

"There is a consensus to hold the elections on the expected date," Lacroix said after a ministerial-level videoconference meeting held on the sidelines of the UN General Assembly.

"Clearly, the unanimous opinion of the international community is to continue to support this process and the staging of elections within the timeframe, and in the best possible conditions," Lacroix told AFP.

Last month, doubts emerged over whether the elections would go on as planned, as significant delays have emerged in the organization of the poll including voter registration.

Violence remains entrenched in the Central African Republic despite a peace accord signed in February 2019 between the government and 14 armed groups, which often claim to defend the interests of specific communities or religions.

In 2013, the Seleka, a rebel coalition drawn largely from the Muslim minority, toppled then-president Francois Bozize, plunging the CAR into a spiral of violence which has forced nearly a quarter of the country's 4.7 million people to flee their homes.

Bozize, who has been back in Central African Republic for a year, will be Touadera's main rival in the election if his candidacy is validated.

During Thursday's meeting, UN Secretary General Antonio Guterres highlighted that authorities and other "national stakeholders have a historic responsibility to ensure the proper conduct of these elections."

Guterres stressed that the polls "must be free, transparent, safe, inclusive and within the constitutional time limits."

"The presidential, legislative and local elections represent a unique opportunity for national reconciliation and the consolidation of peace," he said.

The 3R, one of the most powerful rebel groups in the country, claims to defend the Fulani -- a cattle-herding community also called the Peul.

Its name comes from the words in French meaning "Return, Reclamation, Rehabilitation."

The group signed the 2019 peace accord, but the army and the UN mission (MINUSCA) fear a flare-up in violence.

In June, MINUSCA carried out a wide-ranging operation to root out 3R rebels from bases in the northwest.

When asked about violence in the northwest CAR, Lacroix offered reassurances, saying the June operation was "not a failure."

"The group was noticeably weakened. It had to leave a large number of places," he added.

"It's extremely difficult terrain, with access and infrastructure problems that are absolutely significant, but the (UN) mission did good work."