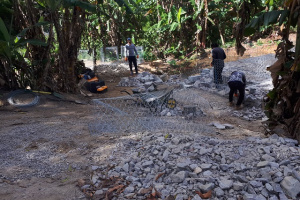 (Seychelles News Agency) - The technology of the gabion - a cage, cylinder, or box filled with rocks, concrete, sand or soil for use in civil engineering, road building, and landscaping – can be taught at the Seychelles Institute for Technology (SIT) should the demand be there.

The director of the institute told SNA on Wednesday that this form of technology introduced in Seychelles two years ago by the Eco Based Adaptation (EBA) Project is proving its worth with students studying construction at the SIT.

"In future, these students are aiming for a career in the field of construction either by becoming a mason or a contractor and the gabion technology is the way forward as it has proven to be a cost-effective, durable and ecofriendly method," said Barbe.

Around 40 students have benefited under the project which is now building its third water reservoir using the gabion technique. Barbe said now that the project is proving to be a solution that adapts well to water issues in the islands, he hopes that people and the authority realises the benefits of the gabion which can also be used to build retaining walls.

"We are willing to introduce this technology as a unit in our construction programme currently being taught at the school if the demand is there," explained Barbe. The director said that in past visits to Reunion – a French department in the Indian Ocean – he had seen many projects using gabion.

These on-site training are seen as a way to build local capacity in constructing gabion rock barrage as an ecosystem-based approach to water storage in Seychelles – a group of 115 islands in the western Indian Ocean. Johan Mendez, the consultant of the project said the agreement between the project and the institute is proving to be a fruitful one.

"We agreed to offer an outdoor classroom to the masonry students so they can have a practical experience in gabion mounting and assembling. Students, once they know what is the purpose and the final product of the construction, they are enthusiastic about the project and the gabion alternative," explained Mendez.

Mendez added that since 2018, EBA has restored two wetlands and is now undertaking the third one in the southern district of Baie Lazare on the main island.  The areas where the water barrages are constructed are designated for agriculture including livestock production.

"The project aims to rehabilitate the upland wetland to enhance our water resources storage capacity. Those were discovered during a mapping exercise in 2016 and at that time eight wetlands were identified for rehabilitation," said Mendez. According to him, the restorations are normally done during the drought season, and the third restoration is expected to complete by November. Once completed the capacity of the wetland will reach around 15,000 m3 (15 million litres) of water.

Mendez said that the new gabion barrages around the wetlands are ensuring constant availability of water in these areas. "Those filtering dams increase our storage capacity but they also play an important role by harnessing the resource instead of letting the water flow down to the sea. The water is used for infiltration in the soil which then regulates the river flow downstream guaranteeing a constant water supply for the river users in the area," said the consultant.

An SIT student at the site of the third barrage that SNA spoke to, Shaun Fanchette, said that he is enthusiastic to learn this new technology which he did not know about. "I am a second-year student and studying to be a mason. This is something that does not use cement and will be cheaper, and when you look at the end product it looks very strong," said Fanchette, adding that it will be at the students' advantage if this is taught at the institute.