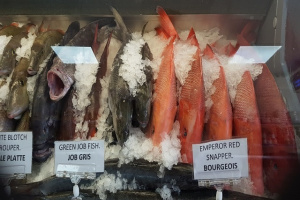 According to the Ministry of Fisheries, there are about 50 tonnes of red snapper being exported annually. (Salifa Karapetyan, Seychelles News Agency)

(Seychelles News Agency) - Seychelles will not ban the exportation of red snapper, a measure that had been considered to make the species more affordable for locals, a top government official said on Thursday.

The Minister of Fisheries and Agriculture, Charles Bastienne, told a press conference that with the adverse impact of COVID-19 on the fisheries sector and the Seychelles' economy it was important to review certain decisions made.

The export ban was announced by President Danny Faure in February and was to take effect in April.

"At that point when the decision was made many businesses like hotels and restaurants were still functioning and they were the main buyers. With a drop in the number of tourists visiting Seychelles since March and with many of these businesses closed down due to COVID-19, our market to sell the fish has reduced," said Bastienne.

Red snapper -- called 'bourzwa' in Creole -- is considered a delicacy in local Creole food and overfishing of the species over the last decade has gradually pushed the price up to its current state as one of the most prized fish in Seychelles.

According to the Ministry of Fisheries, there are about 50 tonnes of red snapper being exported annually. Bastienne said that the authorities will look into implementing a quota for the exportation of this species.

Although the ban had not come into force, the Minister said that there was no exportation of red snapper after the proposed due date of date April 15.

"We know that because to export, you need to be issued with a catch certificate from the Seychelles Fishing Authority. And we have checked and no certificate has been given since then," said Bastienne.

He added that although the doors for export have re-opened, it doesn't mean that it will go back as it was before.

"We feel that it will take time due to complications in other countries. We have also observed that there is a limitation in cargo flights, thus, hindering export," he added.

Meanwhile, the fisheries authorities in Seychelles, a group of 115 islands in the western Indian Ocean, is working on regulation to ensure the protection of the species.