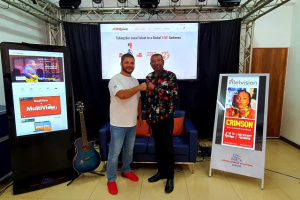 (Seychelles News Agency) - Seychellois music legend Patrick Victor will perform to a global audience for the first time in a concert on Saturday live-streamed on an online platform.

Victor will perform a repertoire of his Creole songs such as 'Mon Pe Esper Ou,' 'Mon Bizou', 'Solin' among others on Jobo Live from 7 p.m. to 9 p.m. Seychelles time.

Victor told a press conference on Tuesday he is excited to see a project that took months of planning come to life.

"When I was first approached by JOBO.sc with this innovative idea during the time of our lockdown in April, I was immediately sold on the project because as artists, we desire a global audience," he said.

The singer added that he is "super excited and proud to be the first local artist to perform live on JOBO.sc. I have many fans throughout the world and some have never had the chance to see me live and this will be their big chance and within the new normal from the comfort and safety of their homes."

As a veteran in the local music scene and the honorary cultural ambassador for Seychelles, an archipelago in the western Indian Ocean, Victor is well known for his patriotic and sentimental tracks. He is also a promoter of the Creole spirit and has collected a number of local awards.

Viewers who wish to watch the live stream performance have to buy an eTicket for SCR250 on the Jobo Live on the Jobo.sc website. A '7-day On-Demand' option is also available as from September 14 for those who will not be able to watch Saturday's performance.

JOBO.sc is an online job board offering employers the platform to list their vacancies and candidates the opportunity to find their dream job.

In his capacity as the honorary ambassador for culture, Victor highlighted the fact that JOBO Live will enable local artists to promote their own work by reaching their fans worldwide especially with the negative impact COVID-19 has had on local performances.

The founder of the website, Hervé Chang-Yunn, said one of the ideas behind the live stream performance initiative was that "Victor's fans are worldwide in different time zones and we had to offer his fans the flexibility of viewing this history in the making performance in their own time."

For his fans, Victor said, "I promise to give a show of a lifetime. It will be my guitar and most of the time accompanied by local back-up singers. Buy your ticket and support local artists so that we can keep on producing good music. I am also encouraging young artists to use this platform effectively."