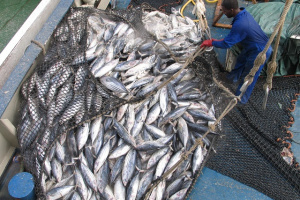 Over half of the income came from the export of tuna, with yellowfin, skipjack and bigeye tuna being the main exported species. (Archives: Joe Laurence, Seychelles News Agency)

(Seychelles News Agency) - Seychelles exported more than 6,600 tonnes of fish and crustaceans in 2019, injecting over $13 million in the country's economy, recent data from the Seychelles Fisheries Authority (SFA) show.

Over half of the income – a little over $6.5 million - came from the export of tuna, with yellowfin, skipjack and bigeye tuna being the main exported species. Tuna purse seining activities in the Seychelles Exclusive Economic Zone (EEZ) is mostly carried out by French and Spanish vessels.

The 115-island archipelago in the western Indian Ocean has a vast exclusive economic zone of 1.4 million square kilometres, hence the island nation looks to the sea for sustenance. The fisheries industry of Seychelles is the second top contributor to the island nation's economy after tourism.

The principal secretary of the Department of Fisheries, Jude Talma, told SNA previously that most fish caught by purse seiners are not processed in Seychelles but are transshipped to other countries.

"However, in the long run, the government is planning to process more of these fish locally to gain more benefit by adding more value to it," he added.

According to statistics submitted by the authority, Cote D'Ivoire was the country that imported the most tuna last year – over 2,600 tonnes at a value of $1.5 million.

After tuna, the sea cucumber brought in the second-most income -- $3.1 million. The majority was exported to Hong Kong. Sea cucumbers are marine animals with a leathery skin and an elongated body containing a single, branched gonad found on the seafloor worldwide. They are so named due to their resemblance to the fruit of the cucumber plant and are consumed fresh or dried in various cuisines. Sea cucumbers are considered a delicacy in East and Southeast Asia.

Fishing of the species in the island Seychelles is regulated and is only carried out during an eight-month-long open season. Fishermen must also have a license to extract the three main targeted species - flower teat fish, white-teat fish, and prickly red - of sea cucumbers.

Hong Kong, the United States and Cote D'Ivoire were the top three countries to contribute the most to Seychelles' economy through their imports of fish.