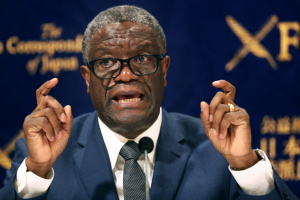 "His life seems to be at serious risk," Michelle Bachelet said in a statement, calling for an impartial probe into the threats against him.

Mukwege, a Congolese gynaecologist who shared the Nobel Peace Prize in 2018 for his work against sexual violence in war, said in late July that he and his relatives had been the targets of death threats.

They were made after he had sent out a tweet condemning the massacre of 18 people in South Kivu, the strife-torn province in eastern DR Congo where he has his clinic, he said.

President Felix Tshisekedi pledged last week that the interior, security and justice ministers and others would "take all measures necessary to ensure Dr Mukwege's security" and "open investigations", his cabinet said.

Bachelet welcomed the public comments from the president, and voiced hope that authorities would provide Mukwege and his team with enough protection to allow them to continue their "indispensable work".

She hailed the Nobel laureate as "a true hero -- determined, courageous and extremely effective."

Bachelet's office noted that he had received death threats in the past and survived an assassination attempt in October 2012.

"It is essential those responsible are brought to justice and that the truth is known," Bachelet said.

This was important, she said, "both as a means to protect Dr. Mukwege's life, but also as a deterrent to others who attack, threaten or intimidate medical workers and human rights defenders who, like him, work for the benefit of the Congolese people, often in exceptionally difficult circumstances."