WHO warns people under 50 driving virus spread in Asia-Pacific 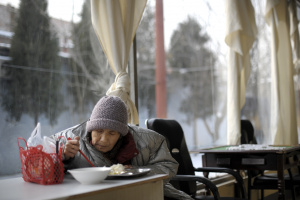 An elderly woman eats her lunch at a nursing house in Beijing. (AFP PHOTO/ LIU Jin)

(AFP) - Coronavirus cases in Asia-Pacific countries are now being driven by people under the age of 50 who may not know they are infected, the World Health Organization said Tuesday, warning of a "new phase" in the pandemic.

Many have mild or no COVID-19 symptoms and risk infecting the elderly and other vulnerable populations, the WHO's Western Pacific regional director Takeshi Kasai told a virtual briefing.

"The epidemic is changing. People in their 20s, 30s and 40s are increasingly driving the threat," Kasai said.

"Many are unaware they're infected with very mild symptoms or none at all.

"What we are observing is not simply a resurgence. I believe it's a signal that we've entered a new phase of the pandemic in the Asia-Pacific (region)."

WHO data on the current phase of the contagion showed around two-thirds of Japan's infections were among those aged under 40.

More than half of the caseloads in the Philippines and Australia were also in that age group.

"We must redouble efforts to stop the virus from moving into vulnerable communities," Kasai said.

Some countries that had brought their outbreaks under control -- such as New Zealand, Vietnam and South Korea -- have detected new clusters, forcing governments to reimpose painful lockdowns on cities and tighten social distancing rules.

But Kasai said the use of targeted interventions in the region was encouraging because it reduced the economic and social impact of containment measures and was more sustainable.

He warned, however, that the challenge will remain "as long as the virus is circulating and we don't have immunity to it".